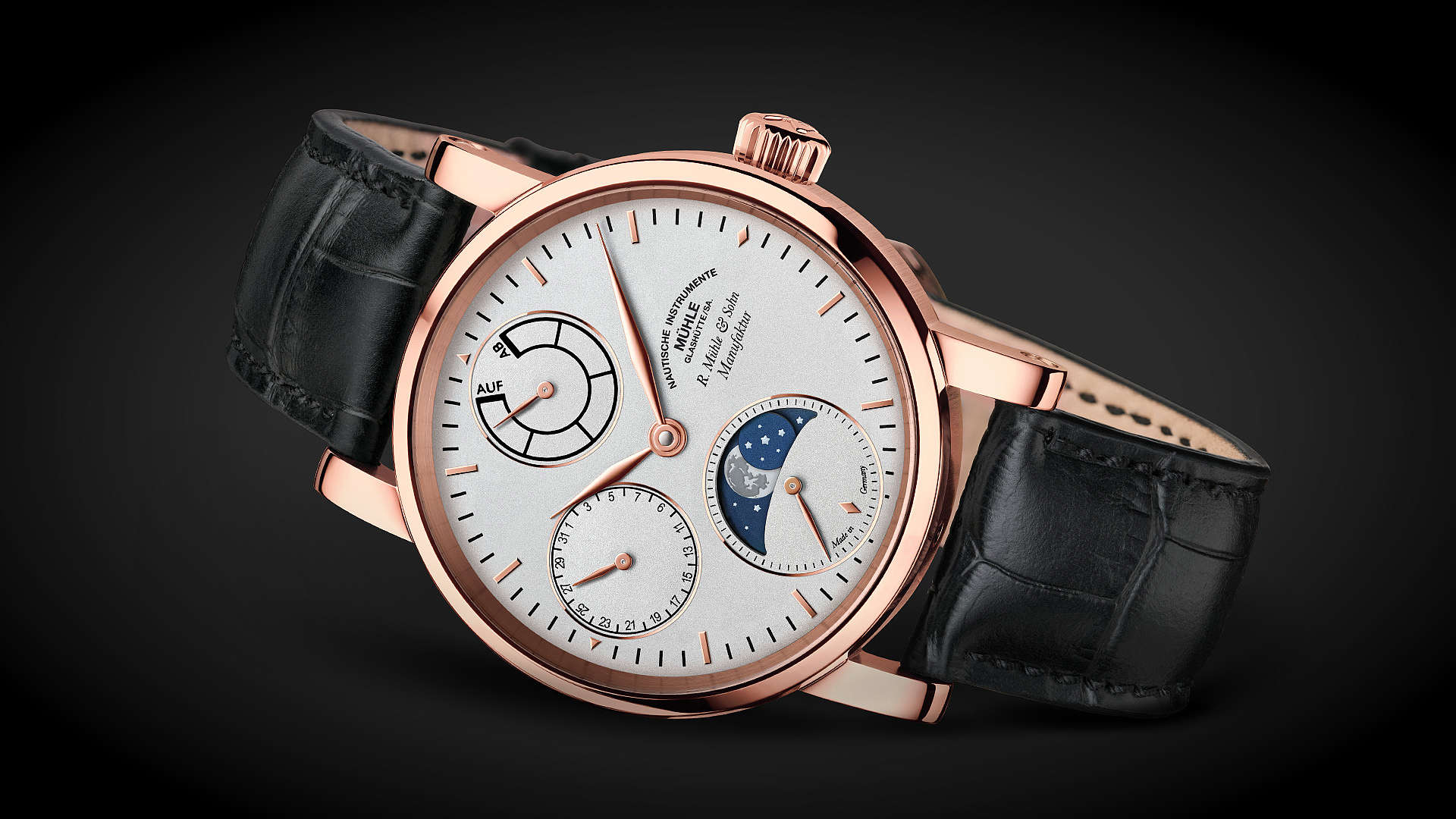 Mühle-Glashütte has been devoted towards achieving precise measurement for 150 years. In celebration of this fact, the manufacturing workshop based in the German town of Glashütte is launching a special edition aligned with the moon in its anniversary year of 2019. After maximum precision has defined the work and products of Mühle-Glashütte right from the very start, it comes as no surprise that the three new time measuring instruments from the “R. Mühle & Sohn” manufacturing line keep up the good work. In fact, the newly designed moon phase display of the “RMK 04” Robert Mühle calibre is so precise that an impressive 122 years must pass before it deviates from the actual position of the moon by even a day. 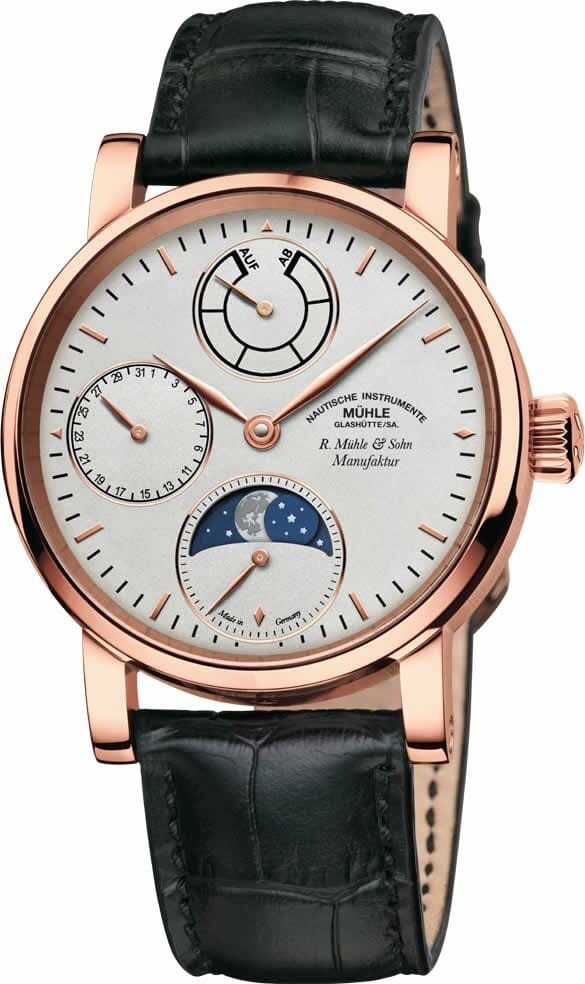 This exclusive moon phase mechanism contains a total of 22 components and can be found in a third of the module plate of the hand-wound movement on the face side of the watch. The other two thirds of the plate are home to the up/down display designed in 2014 and Mühle’s very own pointer date from 2016. These complications are comprised of 25 and 35 components respectively. This means that the manufacturing line’s new calibre contains a staggering total of 202 components and is one of the most complex movements manufactured by Mühle-Glashütte. 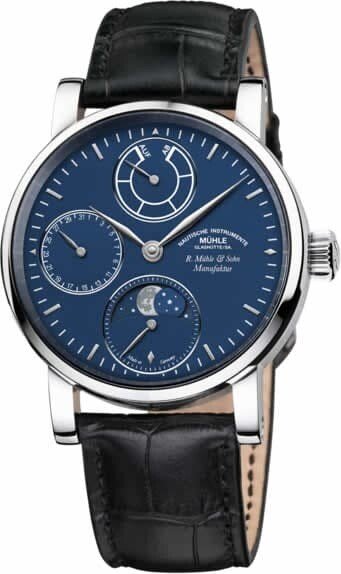 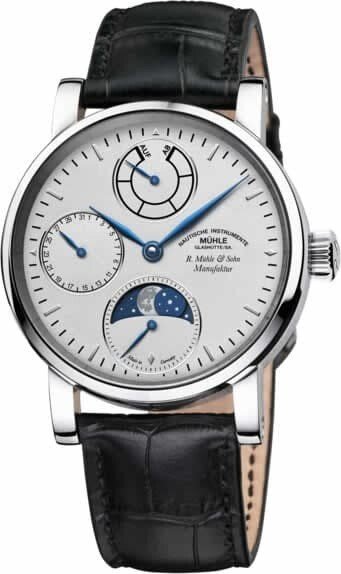 The Manufacturing Line of Mühle-Glashütte

Our manufacturing line harks back to Glashütte’s fine craftsman tradition – back to the days when our family produced speedometers, car clocks and measuring instruments for the local watchmaking industry. This legacy is expressed, for example, by the screw-in gold chatons by Robert Mühle calibres – or by the rare three-fifths plate with which we enhance the movement mechanism of today.

History of the Manufacturing Line 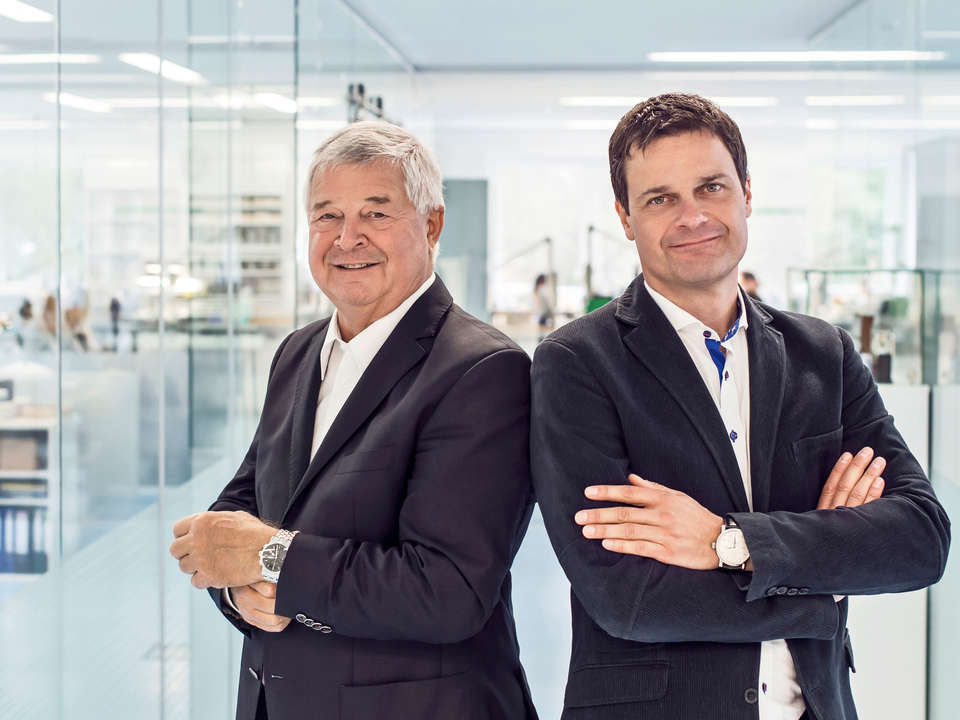 The Robert Mühle Mondphase is the newest model of the “R. Mühle & Sohn” manufacturing line. With this new timepiece the manufacturing line is now welcoming its third new complication designed in house. Alongside its new moon phase display, the impressive 42-millimetre-large platinum, red gold or stainless steel case of this limited special edition also houses the company’s very own up/down display and the Mühle hand date.

Our company’s history begins with the bold decision by Robert Mühle. He was born in 1841 in Lauenstein, a few kilometres from Glashütte, a German town in the Ore Mountains. After his training with watch manufacturer Moritz Großmann, he ventured into business for himself – and in 1869 established a company in Glashütte, manufacturing precision measuring instruments for the local watch industry and watchmaking school.

In doing so, he became firmly committed to a hallmark in our family’s history and our products: precise measurement. At the same time, his measuring instruments were in sync with the times. Because in producing their movements, the up-and-coming Glashütte workshops no longer used the Parisian unit of measure but rather the metric system, which had been newly introduced in watchmaking. And from 1869 the measuring devices and instruments required for this were built at Robert Mühle. With his precise measurement devices, Robert Mühle thus made an important contribution to the fine reputation of Glashütte as the centre of the German watchmaking industry: Only because we worked with such great precision were others able to do the same. 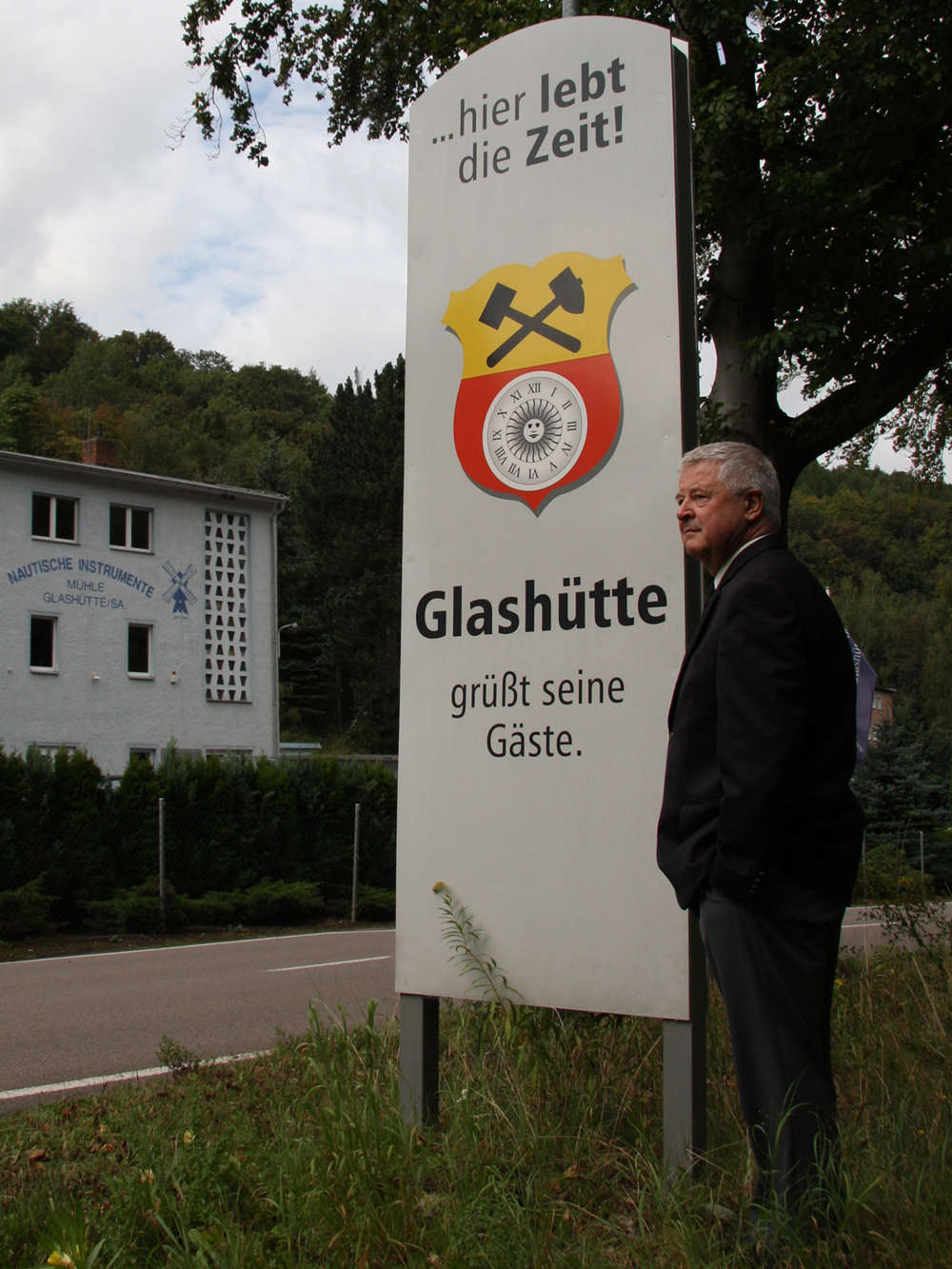 Here he wanted to once again dedicate himself completely to precision and precise measurement. He applied the knowledge that our family had acquired in this field to the manufacturing of marine chronometers and wristwatches. He had gained exposure to this form of measuring instruments as sales manager at VEB Glashütter Uhrenbetriebe. Since that time, our family has produced high-precision marine chronometers, marine time systems and other nautical instruments. Two years later, the first mechanical wristwatch was launched.

Hans-Jürgen Mühle (*1941) had studied precision engineering as well as optics in Jena and later worked at one of our company’s suppliers. After the death of his father, he became plant manager of the family company and was able to continue the life’s work of his ancestors until our family was expropriated in 1972 in Socialist East Germany. In fact, the company was first turned into a state-owned enterprise and later integrated into the VEB Glashütter Uhrenbetriebe, GUB in short (Glashütte Watchmaking Plants).

By the time German reunification came, Hans-Jürgen Mühle had been promoted to sales manager at GUB. In order to usher the company into a new economic system, he and four other colleagues were appointed managing directors. After fulfilling this task, he left GUB. For he saw his true calling in another area. It was the family company and the tradition of his forebears to whom he felt a commitment. That is why in 1994, Hans-Jürgen Mühle founded “Mühle-Glashütte GmbH nautische Instrumente und Feinmechanik”. 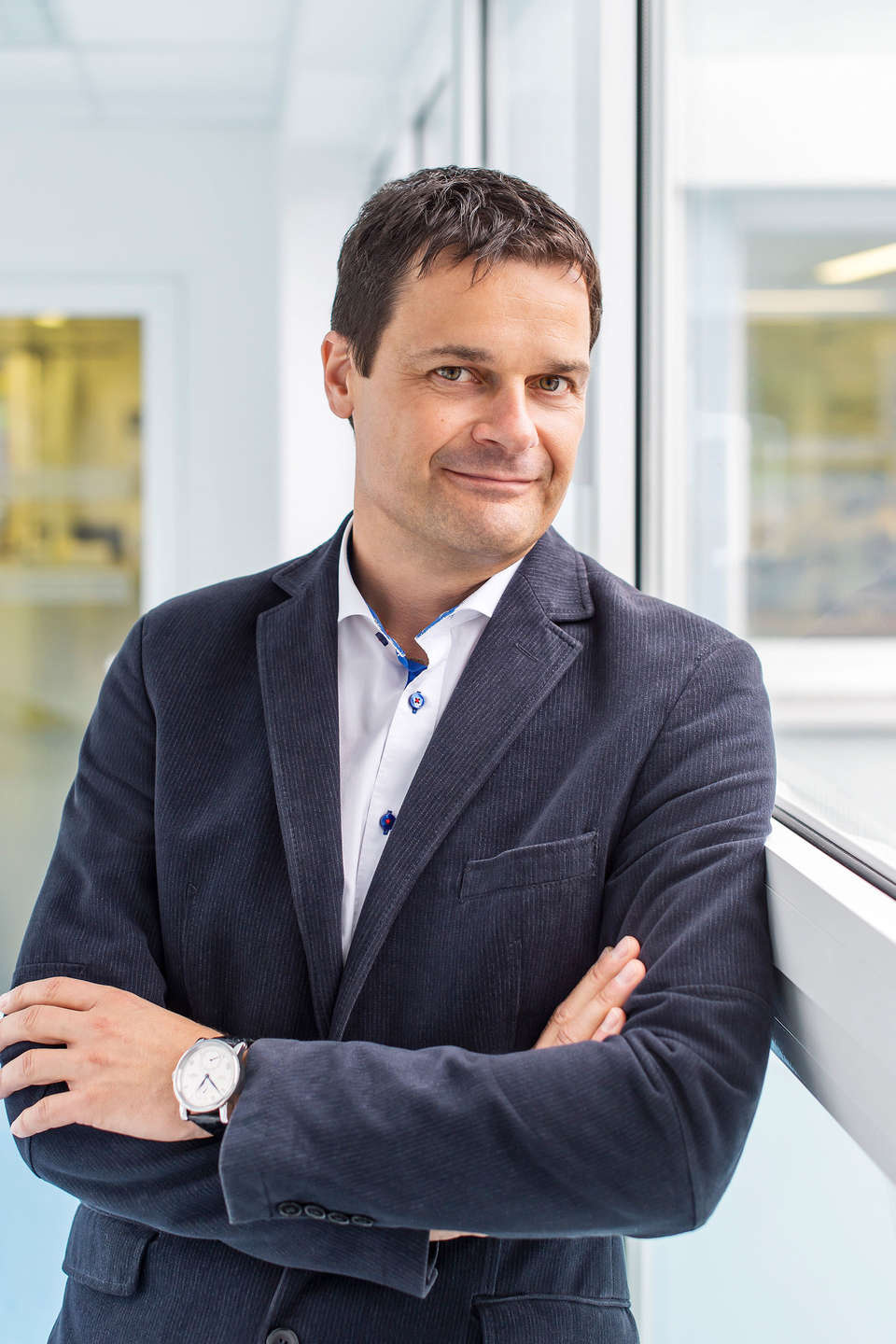 With Thilo Mühle, our company has a fifth-generation managing director at its helm. Under the leadership of Thilo Mühle, the company has grown step-by-step into what is known in the watchmaking trade as a manufacturing workshop: it means becoming a watchmaker who has the capability of designing his own movements and manufacturing the majority of the required components in-house.

The initial step in this direction is represented by our chronograph movement MU 9408. This centres around a basic movement that was modified so profoundly, it required its own calibre designation. The first movement designed completely in-house was our hand-wound movement MU 9411, which is used exclusively in the Teutonia III Handaufzug watch. The trend is made complete by the new Robert Mühle Kaliber 04.

It’s exclusive moon phase mechanism contains a total of 22 components and can be found in a third of the module plate of the hand-wound movement on the face side of the watch. The other two thirds of the plate are home to the up/down display designed in 2014 and Mühle’s very own pointer date from 2016. These complications are comprised of 25 and 35 components respectively. This means that the manufacturing line’s new calibre contains a staggering total of 202 components and is one of the most complex movements manufactured by Mühle-Glashütte.