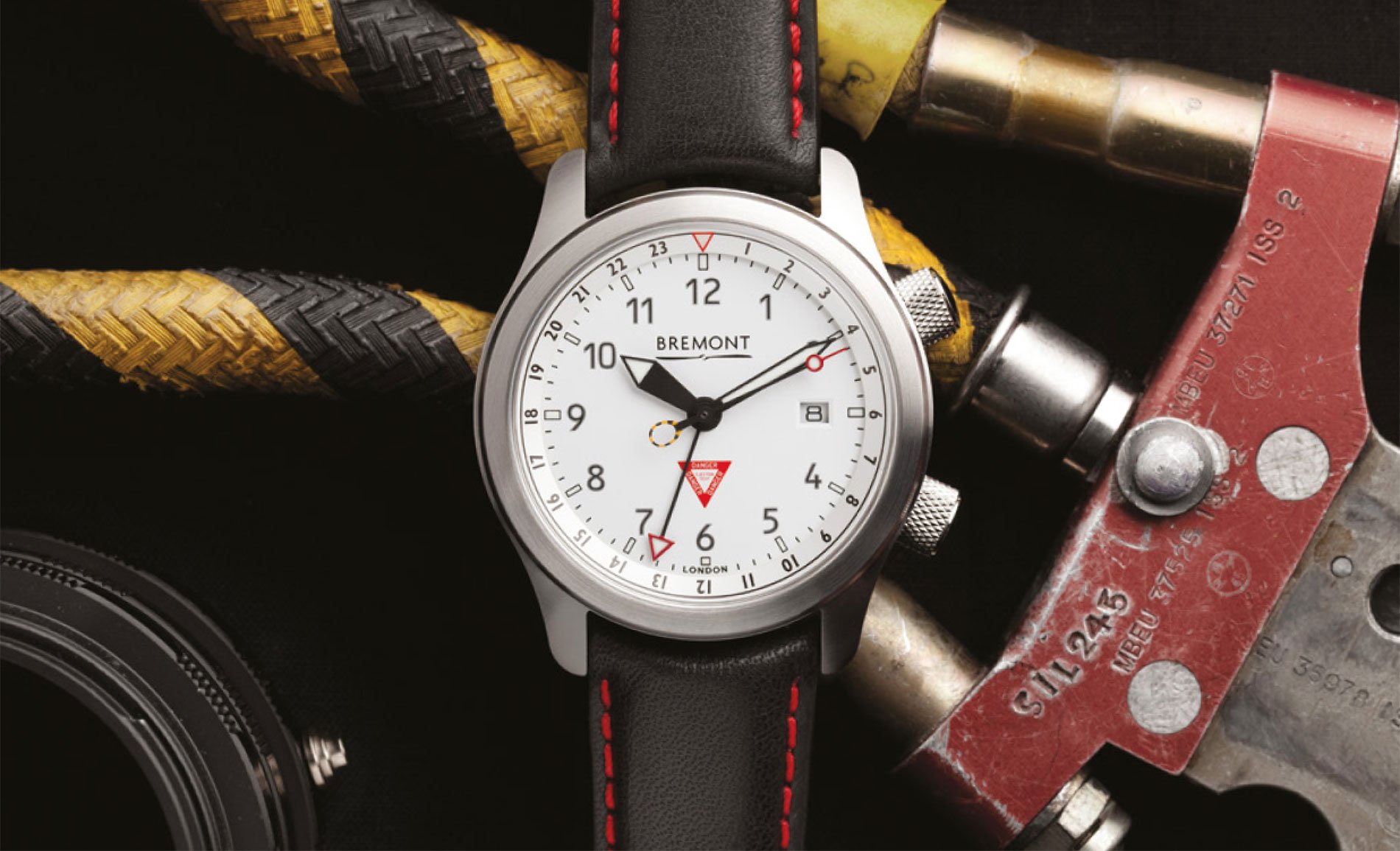 10 years on from the launch of the Bremont MB range, born from a partnership with Martin-Baker which has not only become synonymous with the Bremont brand, but which celebrates pioneering British engineering, the luxury British watch company introduces the anniversary MBIII/10th GMT chronometer. The new white dialled MBIII, limited to only 310 pieces, has been designed and built to mark the 10th Anniversary since the release of Bremont’s first MB watch back in 2009. Martin-Baker, the British aviation company responsible for supplying over 70% of the western world’s Air Forces with fighter ejection seat technology, is at the very pinnacle of British engineering and innovation; the now iconic Bremont MB range has redefined the aviation watch world.

Martin-Baker first approached Bremont to create the definitive aviation watch in 2007. More than simply putting a logo on a dial, they wanted to challenge conventional mechanical watch design and create a timepiece which could withstand the same rigorous testing programme as the ejection seats themselves. Two years later, in 2009, the Bremont MBI was born. Whilst the MBI remains solely for pilots who have ejected from an aircraft using a Martin-Baker seat, the MBII and MBIII are available to all and have become Bremont best sellers. The unique case design, distinct coloured barrels, and ground-breaking technical features have made it an instant favourite among aviators in the military and civilian worlds alike. 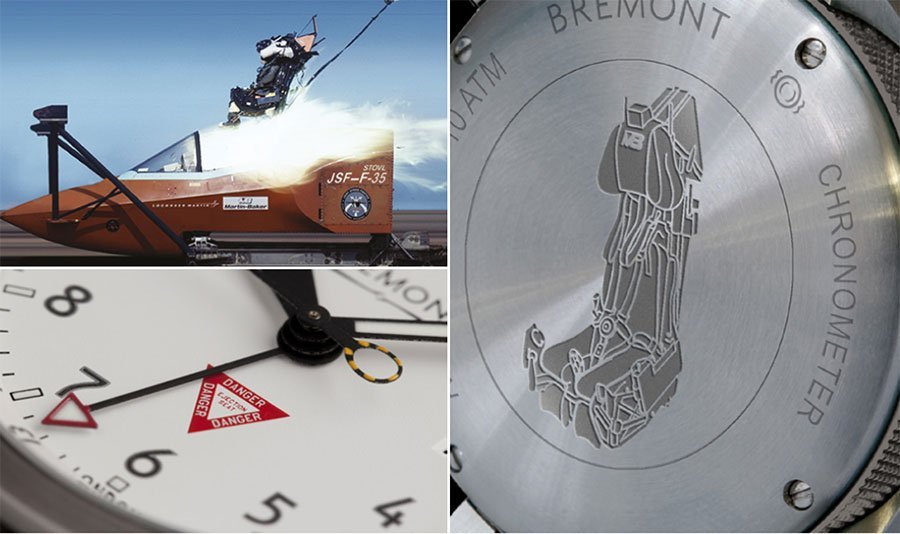 Clockwise from left: Live ejection testing at the Martin-Baker facility, the new etched case back of the limited edition MB and the ‘Danger Ejection Seat’ triangle that features prominently on the dial of the new model.

The new Limited Edition MBIII/10th has GMT functionality operated by a skilfully manufactured inner Roto-Click® bezel which has a series of minute ball-bearings, with microns of tolerance, to achieve a very satisfying 48-clicks with one full rotation of the bezel. The dial bears the ejection danger triangle logo displayed proudly at 6 o’clock, and the case back features an etching of the state-of-the-art MK16 seat, from the F-35 fighter jet. The stainless steel 43mm case, machined at Bremont’s manufacturing facility near Henley-on-Thames in the UK, is complemented by its knurled effect titanium case middle. The knurled barrel, inspired by components on the ejection seats themselves, has become signature to the MB design together with the yellow and black loop at the end of the second hand referencing the ejection pull handle. The watch houses a beautifully finished chronometer- rated BE-93-2AV mechanical movement.

Andrew Martin of Martin-Baker, “We take precision engineering and quality extremely seriously, the standards to which we have to work determine the integrity of a device that is the difference between life and death. To have worked with another British company over the past decade which shares the same work ethic and passion for the best of British engineering has been very special indeed and has led to us creating something truly unique in the watch space. I am incredibly proud of what we have achieved together to date; the sheer numbers of very happy military and civilian air-crew out there wearing the Bremont MB range says it all.”

The intensive and extensive testing schedule that the watches needed to undergo was a prerequisite, and so determined the necessity for a robust and over-engineered MB design. Both the movement and mechanism of the Bremont MB have been designed to ‘float’ in a controlled manner within the Bremont patented Trip-Tick® case by attaching it to the inner case via a flexible ring. In doing so, shocks to the movement are minimised and shock energy absorbed enabling the watch to survive extreme G forces from live ejection launch testing. Additionally, the inner case that encloses the movement of the Bremont Martin-Baker has the function of an anti-magnetic shield; made from soft iron it has been designed to work as a ‘Faraday-Cage’ making the watch resistant to extreme magnetic fields. Truly ‘Tested Beyond Endurance’, some other testing that the prototype watches undergo include being held in an Altitude Test Chamber to simulate taking them up to 100,000 feet for 60 minutes before being rapidly brought down again. The Aircraft Carrier Deck Test simulates the level of salt fog and humidity that an aircraft carrier deck would endure during a 6-month tour; exposure to salt, and then drying for 96 hours, tests the watches against corrosion and the binding of moving parts. Prototype watches are put through extreme vibration testing where, during a 4-hour test, they experience the level of vibration on an aircraft over the course of a 30-year lifespan. Extreme temperature endurance testing ensures the watches still function at temperatures as low as -40° C and up to +40° C whilst tests such as the Multi- Functional Operators Seat simulate a dynamic forward crash at over 18G, moving at 42ft per second.

Bremont Co-Founder Nick English comments, “I cannot believe 10 years have already passed since the first MB watch was released. I have nothing but complete awe for what Martin-Baker has accomplished for the aerospace industry and to have done so on British soil. They are undoubtedly one of the most impressive engineering companies today and are world leaders in their field. The MB range has become a must-have for any serious collector, the story and indeed the product speak for themselves.”

With facilities spanning the globe, Martin-Baker has established an extensive range of unique, specialist engineering capabilities. They ensure that all Martin-Baker products are of the highest quality and reliability and will always perform as designed – first time, every time. Past and continued success has defined the iconic British company as the number one choice for over 88 air forces throughout the world, fitted to over 80 aircraft types. The equipment may represent a crew member’s last chance to survive and there can be no compromise. Every facet of the safety system must work perfectly to safeguard a precious life.

Furthermore, aircrew members must reach the ground uninjured, especially in a hostile environment, if they are to have the best possible chance of survival. This understanding is reinforced by 70 years of experience dating back to the first live ejection test in 1946 and the first life saved in 1949. So it comes as no surprise that Martin-Baker is the only company worldwide able to offer a fully-integrated escape system that satisfies the very latest in pilot operational capability and safety standards. To date, Martin-Baker has saved 7,595 aircrew lives for more than 93 Air Forces.

Bremont is an award-winning British luxury watch brand, manufacturing mechanical watches in Henley-on-Thames, England. Bremont is making considerable investment with its UK watch making and manufacturing and at the end of 2014 launched a new Parts Manufacturing Facility which saw the firm starting to produce its own case and movement components. Co-founded by brothers Nick & Giles English in 2002, Bremont has made a substantial impact on the watch making industry in a very short period of time. The brand remains true to its original principles of: aviation and military, British engineering and adventure. As well as manufacturing watches for some of the most exclusive military squadrons around the world, Bremont continues to play an influential role in revitalising the British watch industry, the birthplace of numerous timekeeping innovations still used today. The brand is now in the top handful of chronometer producers in the world. 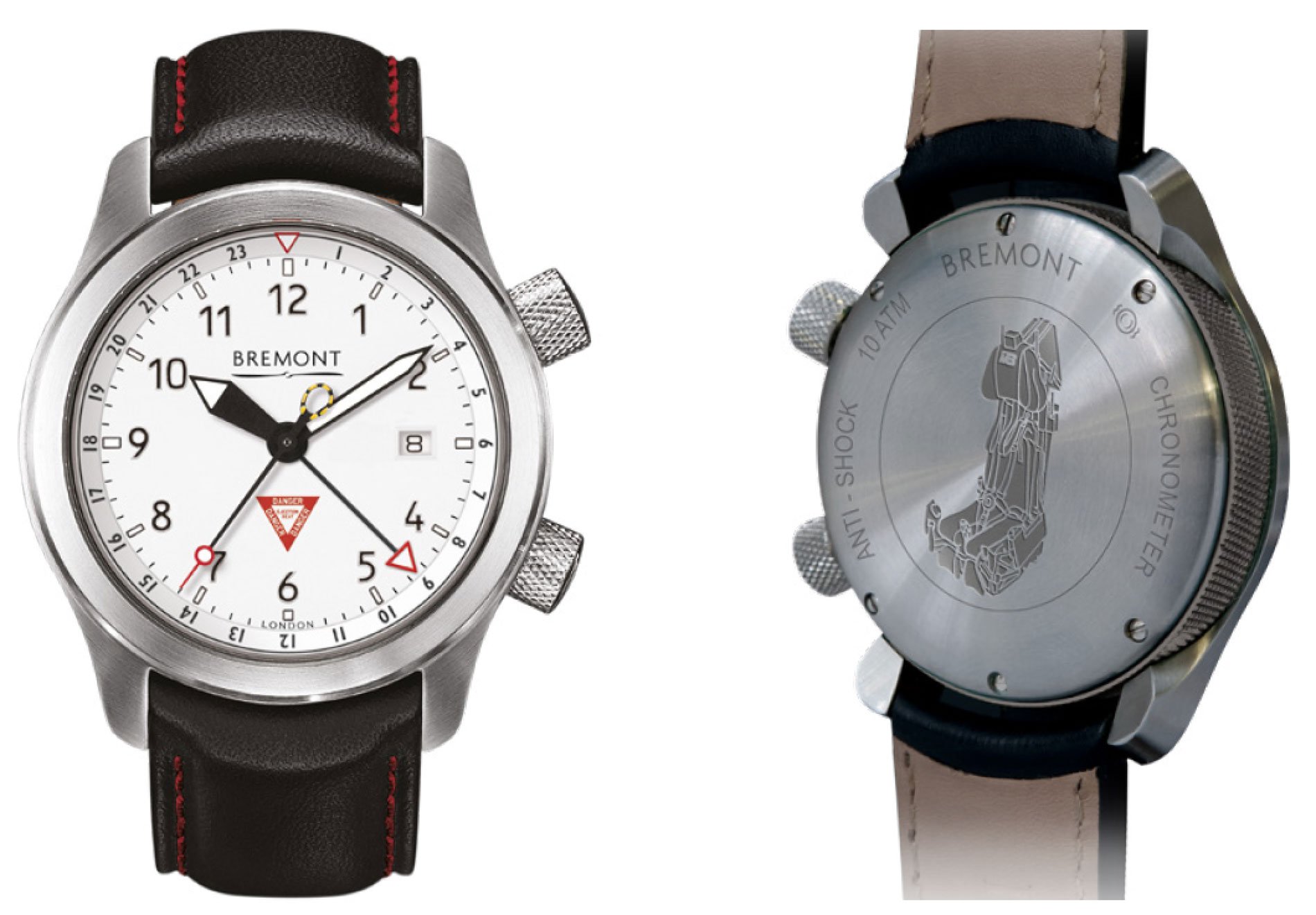