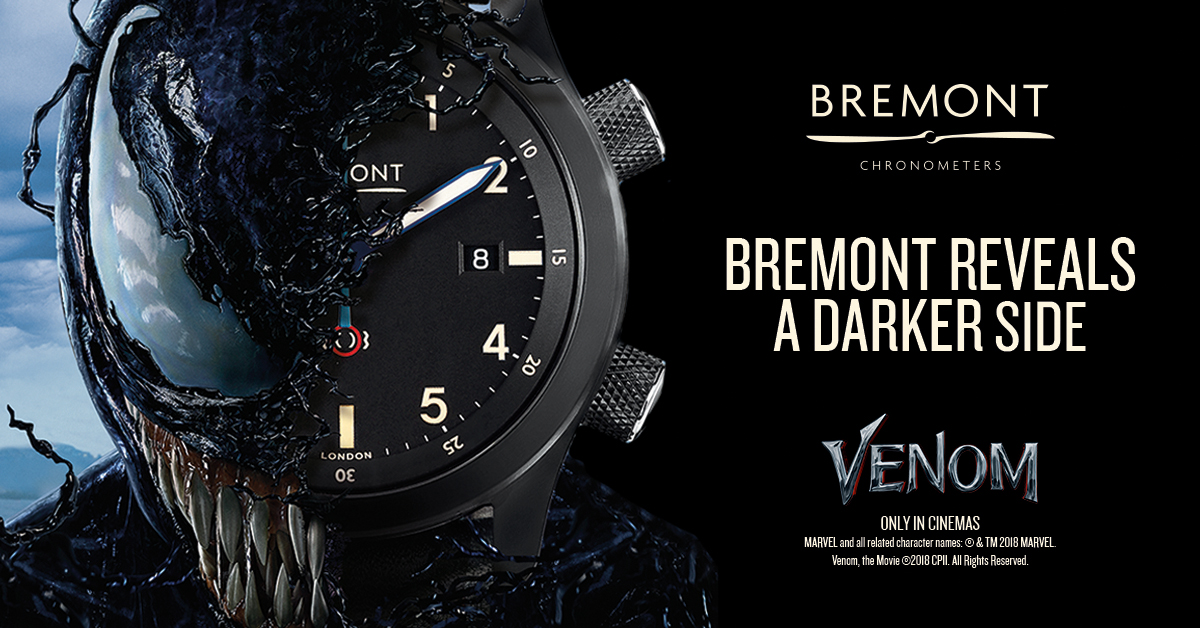 Not only does the new U2/51-JET appear in Colombia Pictures’ Venom but, in collaboration with the studio, Bremont has teamed up with a renowned comic artist to paint the Bremont Broussard, the brand’s former 1950’s French military aircraft. October 2018 will see the release of Columbia Pictures’ highly anticipated, action packed film Venom, one of Marvel’s most enigmatic, complex antiheroes. With the trailer having reached 64 million views in its first 24 hours of release, Venom may be one of the biggest films to hit screens this autumn. An utter masterstroke in casting The new U-2/51-JET appears in Columbia Pictures’Venom delivers Academy Award® nominated actor Tom Hardy as Eddie Brock and the lethal protector. Hardy, who has unique talent and range in creating brooding, dark and twisted characters for the big screen will no doubt have audiences captivated. Fitting with the dark and sombre tone of the film, the new stealthy Bremont timepiece can be seen throughout, adorning his wrist. 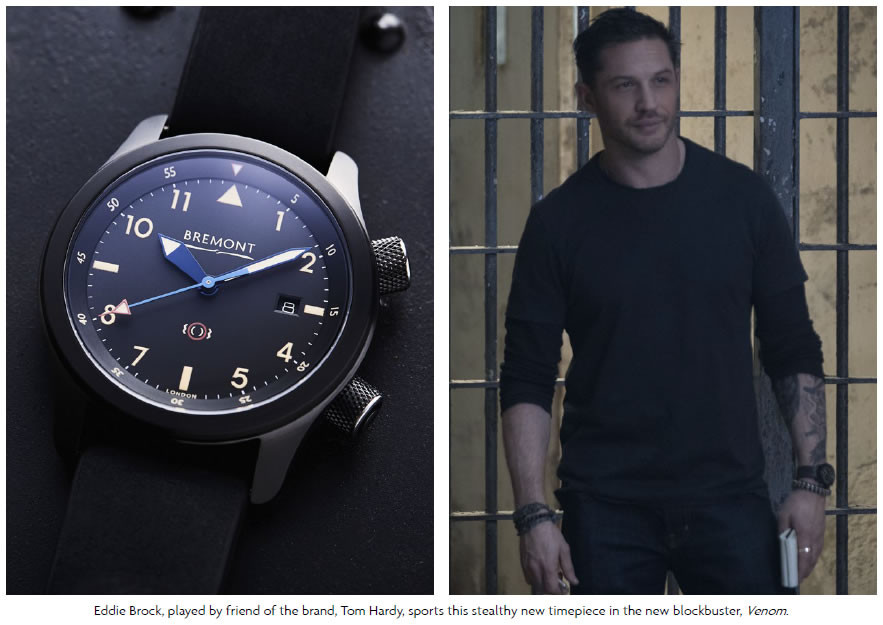 The U-2/51-JET takes design cues from some of Bremont’s military work commissioned by the RAF’s 100 squadron members to complement their Hawk T1 jet aircraft. The 100 Squadron was the first squadron formed for night bombing back in 1917 and its stealthy appearance led to the introduction of this ‘Jet’ black timepiece complete with black smoked glass open case back through which one can view the automatic movement.

Nick English, Bremont Co-Founder; “Tom is not only a phenomenally talented actor but is perfectly placed to bring to life this lethal protector and his struggle between good and bad. The jet black, synonymous with the RAF 100 Squadron, has certainly made the U-2/51-Jet Bremont’s stealthiest watch to date which we felt lent itself to the darker side of the film. We’re honoured to have Eddie Brock, played by Tom, wearing our watch throughout and we’re incredibly excited to see the finished product in October.” 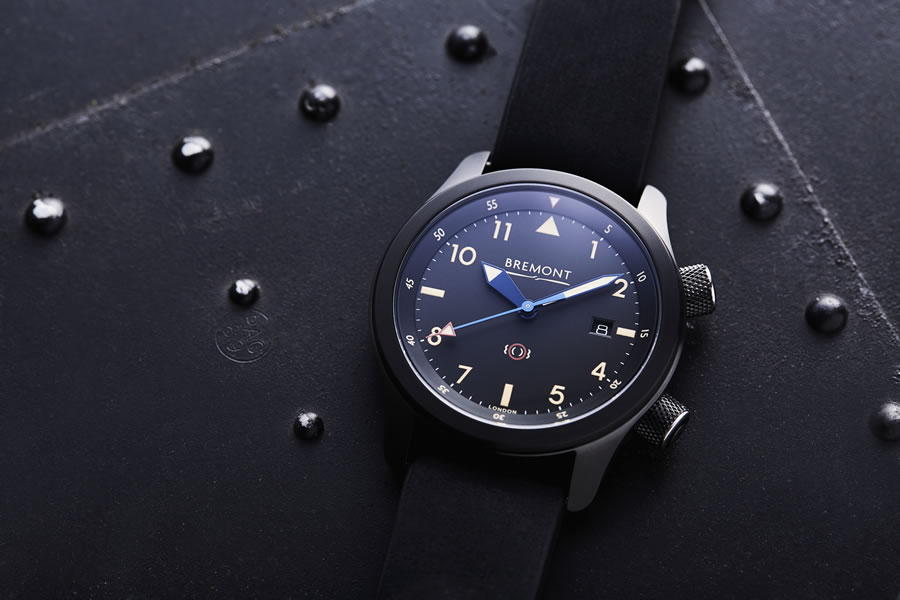 In collaboration with Sony Pictures, Bremont has teamed up with comic artist and aviation enthusiast, Adi Granov, to paint the Bremont Broussard, the brand’s 1950’s French military aircraft. Inspired by the iconic shark tooth design seen on the WWII fighters Adi unleashed Venom on the nose of the Broussard, giving it a modern-day twist. The depiction of Venom (a character known for his menacing teeth) around the radial engine, combined with blacked out fuselage, has dramatically changed the look of the aircraft. With aviation deeply rooted in Bremont’s DNA it was a perfect way for the brand to bring Venom to life.

Largely considered a military tradition, nose art painting began for the practical reason of identifying friendly aircraft. The practice then evolved to express the individuality of the planes and was used to evoke memories from home and life outside the military, providing protection against the stresses of war. 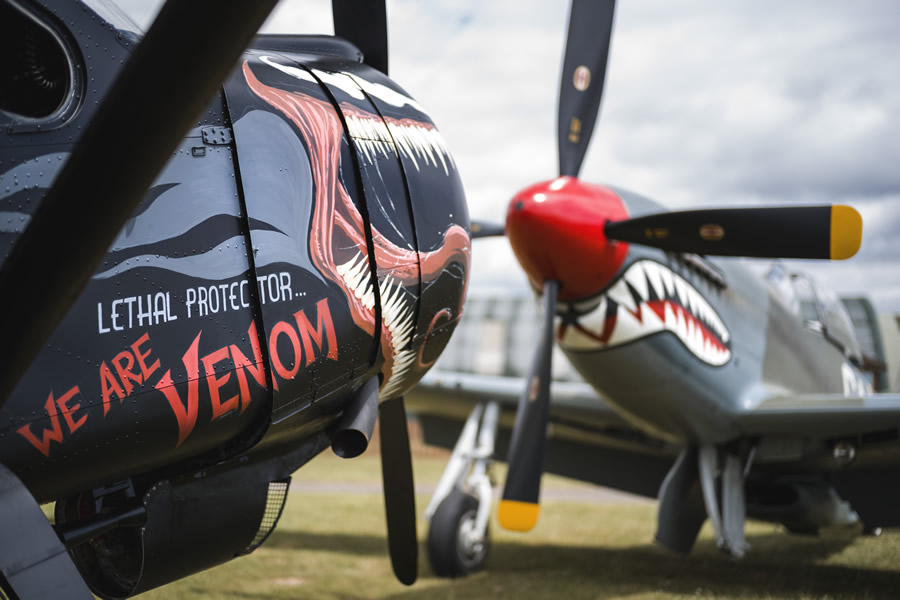 In painting the Bremont Broussard (known as the ‘Bremont Bus’) with its new Venom nose art, artist Adi Granov said “The Bremont Bus is such an integral part of the Bremont brand story and so this is one of the largest scale projects I’ve ever worked on. The biggest challenge I’ve found was trying to keep the perspective on both sides of the aircraft. I’m an aircraft enthusiast as well as a watch enthusiast so when I was approached to work on this project it was great and it’s amazing to see my piece of art flying through the air.”

AIKON QUARTZ CHRONO 44 MM CAMOUFLAGE: AN EVERYDAY ALLY TO FACE OFF IN THE URBAN JUNGLE!
August 8, 2019