This automaton takes flight once again in a limited series whose centerpiece is an exquisite mineral dial made of Chinchilla Red, a wood petrified 150 million years ago.

The silence is palpable as stunned collectors gasp in awe. Jaquet Droz is one of the only watchmakers in the world that crafts automatons. Quick on the heels of the onyx and meteorite models, today it unveils the latest version of its Loving Butterfly Automaton. This newest chapter in the company’s 300-year exploration of natural fibers showcases its watchmaking mastery and artistry in a series strictly limited to 28 timepieces

The animated objet d’art is inspired by a drawing titled Le papillon conduit par l’amour (Butterfly Driven by Love), which was sketched in 1774 by The Draughtsman, an automaton created by Henri-Louis Jaquet-Droz. Today, it is transformed into a three-dimensional journey of ancient mineral. Set against a backdrop of a forest of gold, the piece features a dial made from wood petrified 140-180 million years ago called Chinchilla Red, named after the far-eastern locale in Australia where it is found.

This mineral has a remarkable history. When dinosaurs ruled the Earth 150 million years ago and birds began to hatch, the first flower bloomed. That is also when Chinchilla Red came to be. It was formed by fir trees covered in volcanic ash that were swept away by lava. The product is an exceedingly rare and dense mineral. It takes countless hours of manual work just to make the surface smooth 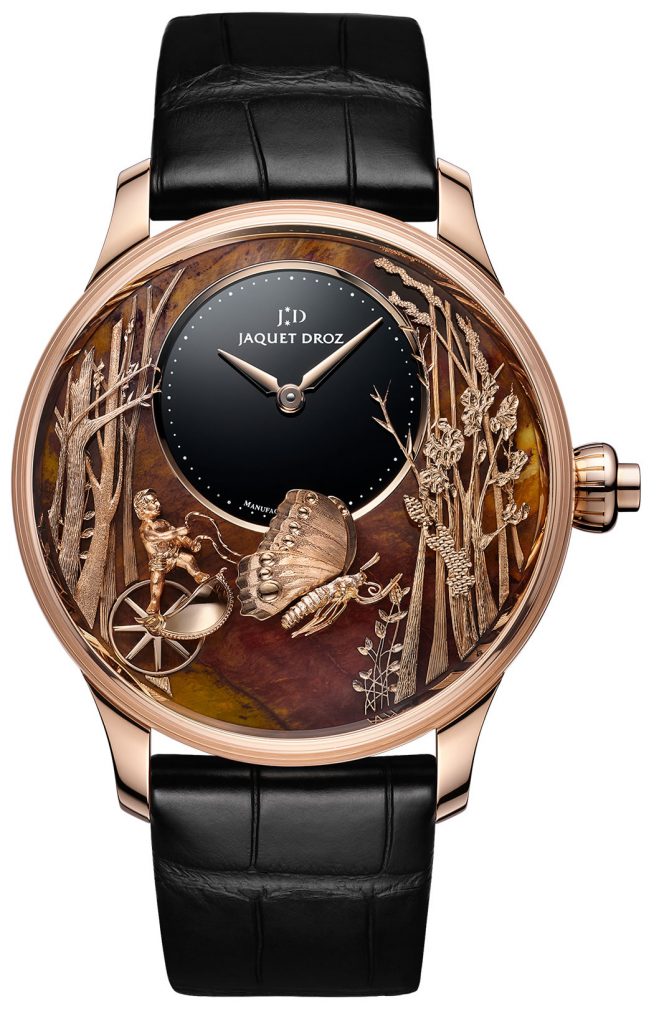 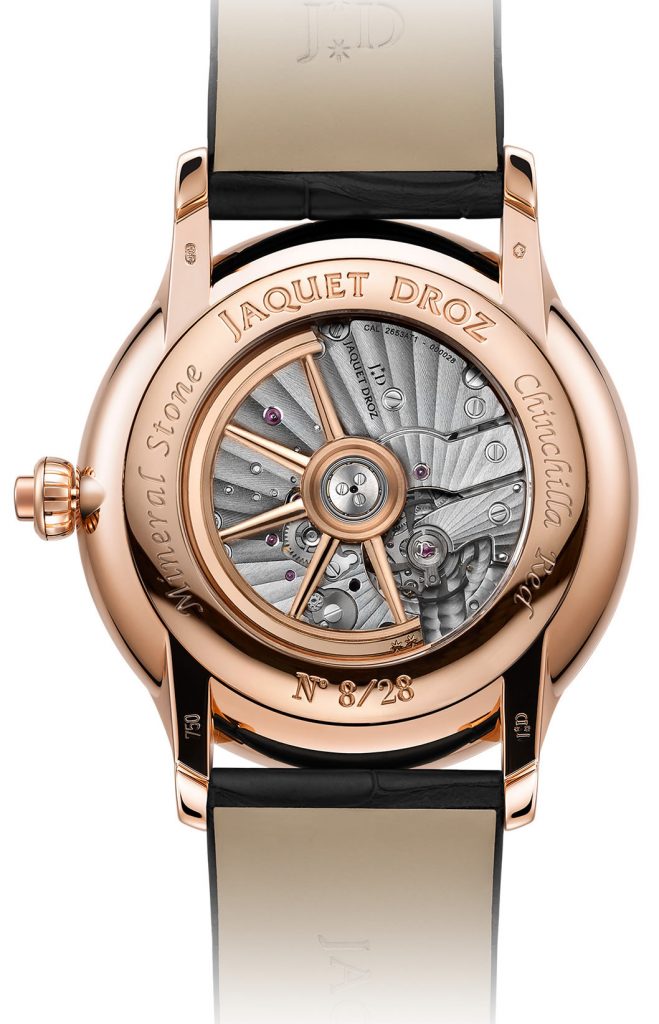 This new rendition magnifies the Cherub and the Butterfly, a classic metaphor for labors of love. The chariot symbolizes victory and the butterfly represents Cupid. Like the chariot, the butterfly comprises several dozen stationary and moving appliqués hand-etched by Jaquet Droz artisan jewelers. The scene unfolds on a veritable stage of nature with a set that actually rises up all around the dial. Multiple levels lend the piece a unique depth of perspective that invites the gaze to wander, drift and stray. A striking realism takes shape, proliferating with details that bring the scene to life

The artful watch complication breathes life into an animated nature scene. The butterfly’s wings flutter in time, placed close against the sapphire crystal to make it seem like the butterfly is about to break free and fly out of the scenery. Even the wheels on the chariot turn, but not all of the spokes rotate, which creates an optical illusion that Pierre Jaquet-Droz began using nearly three centuries ago.

The figures are surrounded by a gold backdrop entirely crafted by hand. Each tree spans a mere 0.2 mm – its slender grooves carved one by one using purpose-designed tools– and is individually placed in its very own setting

The Chinchilla Red limited series in petrified wood is a dance of chromatic unison. The autumnal hues of the stone blend with the warmth of the 18-carat red gold. Each of these one-of-a-kind timepieces has a slightly different mineral dial, a full glimpse into the exquisite workmanship of the Jaquet Droz Ateliers d’Art and the art of astonishment created in 1738.

Part of the proceeds from the sales of the Loving Butterfly Automaton will go towards reforestation
Deeply affected by global deforestation and in particular by the fires that have devastated Australia in recent months, Jaquet Droz has announced that part of the sales from the Loving Butterfly Chinchilla Red automaton will be donated to associations dedicated to reforestation and the preservation of endemic species such as “Plant a Tree for Me” or “One Tree Planted”. The timepiece presented today was made possible thanks to Australian wood petrified 150 million years ago. Jaquet Droz therefore affirms its commitment to give back what the nature is offering us, carried out within an eco-responsible, ethical and sharing framework, as represented by the Loving Butterfly Automaton Chinchilla Red’s, a true ode to love.