Since it was founded, Bell & Ross has been passionate about military history and its functional and aesthetic archetypes. Flight instruments will always be a source of watchmaking inspiration for its designers. As such, military specifications provide Bell & Ross timepieces with rigorous and exacting standards in terms of legibility, functionality, precision and reliability. Modern-day codes also drive Bell & Ross to revisit historic pieces to create new models whose design and technology are in line with current trends.

Since it was founded, Bell & Ross has been passionate about military history and its functional and aesthetic archetypes. Flight instruments will always be a source of watchmaking inspiration for its designers. As such, military specifications provide Bell & Ross timepieces with rigorous and exacting standards in terms of legibility, functionality, precision and reliability. Modern-day codes also drive Bell & Ross to revisit historic pieces to create new models whose design and technology are in line with current trends. 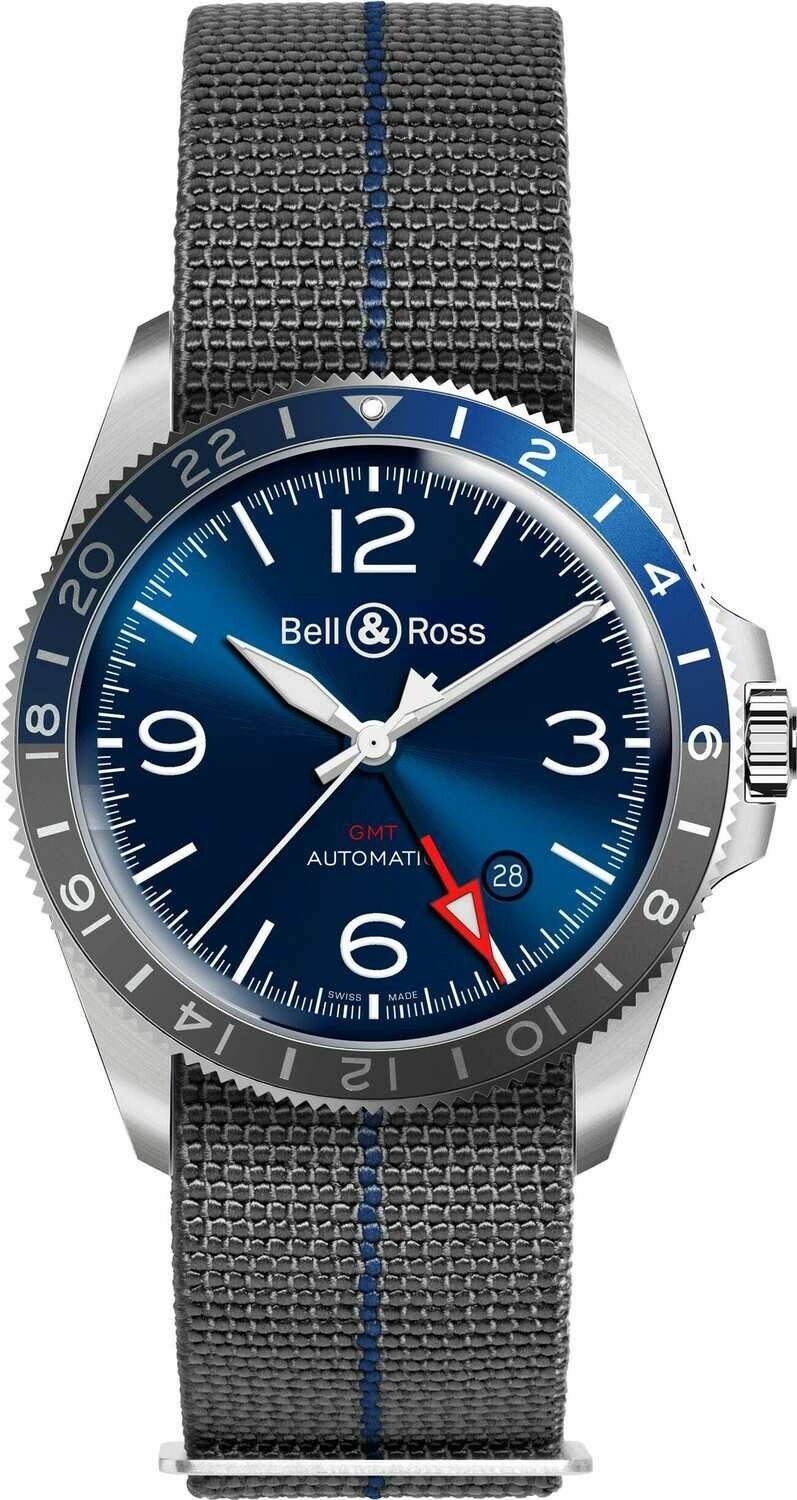 The GMT models can display two time zones at the same time. An indispensable tool for aircraft pilots and a companion for globetrotters, these “tool watches” go back to basics in terms of their design and shape which were influenced by two keywords: functionality and legibility. Following on from the BR V2-93 GMT 24H launched in 2018, this year, Bell & Ross has completed its range of watches targeted at modern frequent travellers – both professional and civilian – in search of a chic and functional timepiece. The contemporary design of the BR V2-93 GMT Blue – perfectly suited to 21st century travellers – places it at the heart of the modern era. 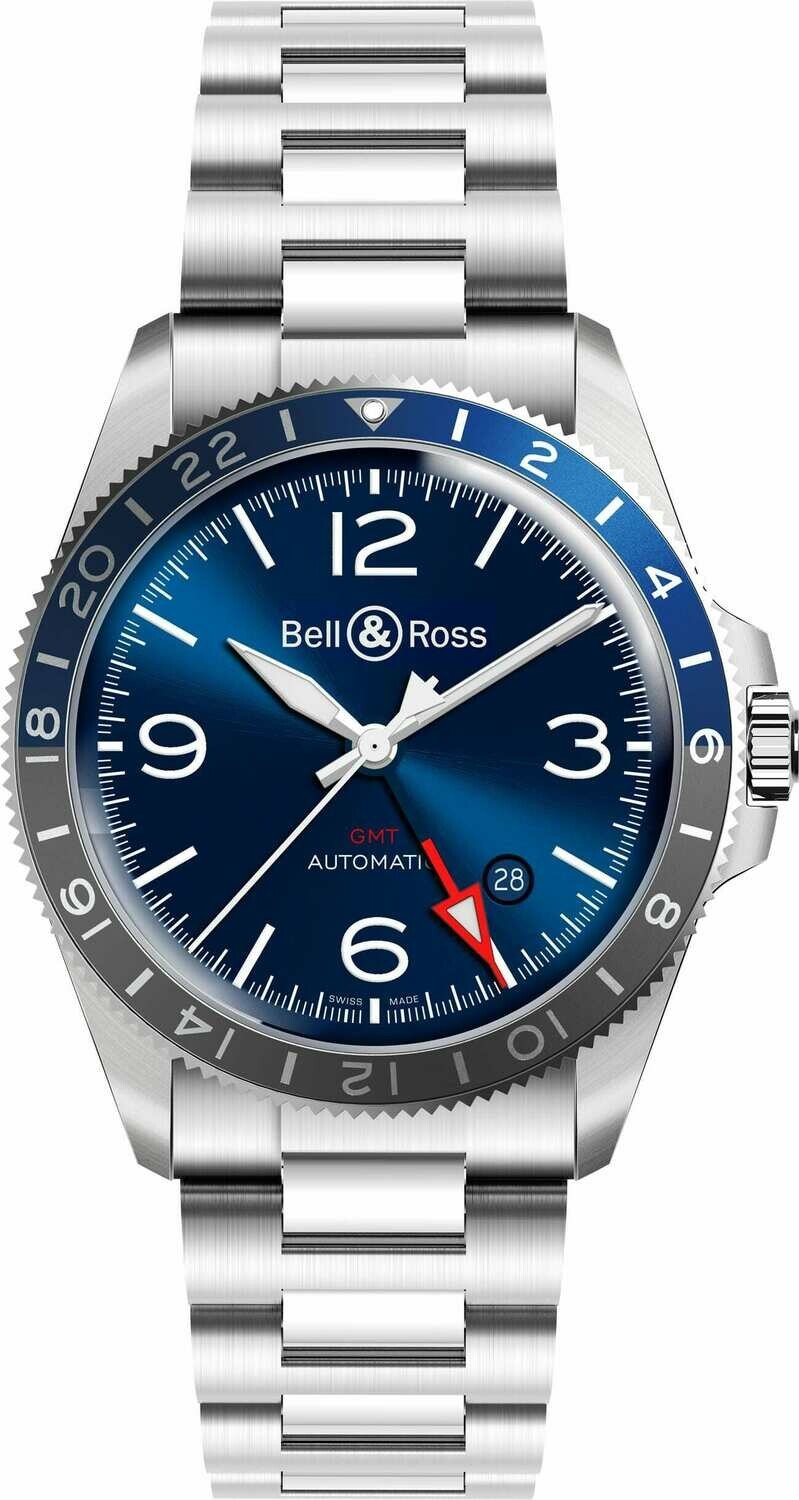 Its 41-mm round steel case is characteristic of the Vintage series, with integrated protection for the screw-down crown. With a galvanic blue case-back featuring a sunray pattern, the dial is a nod to the world of air travel and long transatlantic trips, while the second hand counterweight is subtly styled in the shape of an aircraft. The bi-directional rotating bezel in two-tone anodised aluminium (grey for daytime and blue for night-time) means the time in a second time zone (shown on a 24-hour scale) can be read instantly thanks to the fourth hand, or the “GMT” hand, with its stand out red arrow.

For optimal legibility, the four faceted hands and the decal indices and numerals boast a photoluminescent coating in white Super-LumiNova® 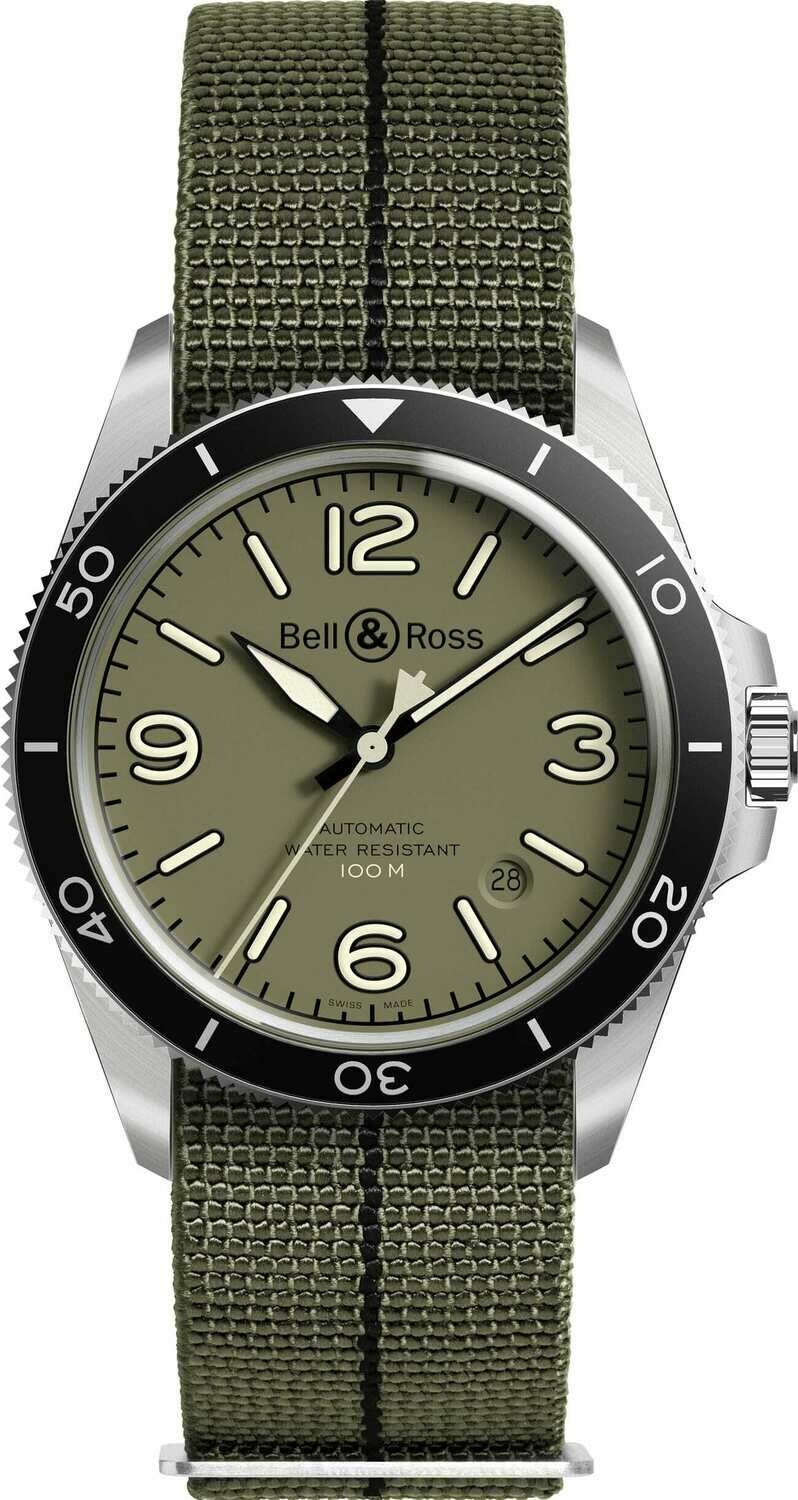 Based on the principle that the essential should never give way to the superfluous, with this new BR V2-92 Military Green model, Bell & Ross engineers and watchmakers have designed a practical watch perfectly suited to all uses. Paying tribute to the men on the ground who were the first to use the wristwatch as fundamental instruments for their missions, Bell & Ross has unveiled a sport-chic civilian version of its BR V2-92 which evokes nature and wide-open spaces. Staying faithful to the military technical specifications, the anti-reflective matte khaki dial is legible both day and night, the sapphire crystal is scratch-resistant and the Swiss mechanical movement with automatic winding is highly precise and has been tested for all types of missions. 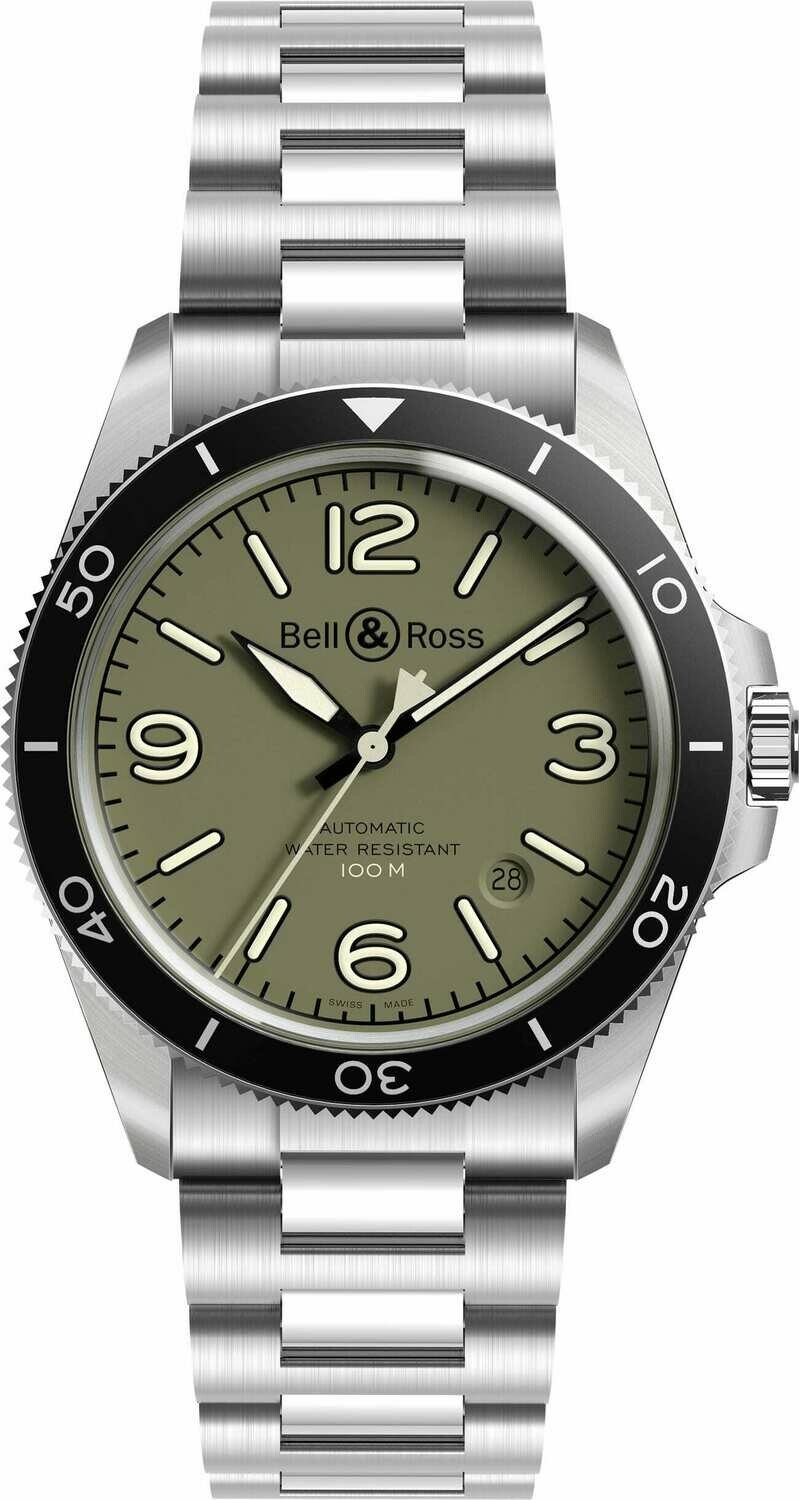 To ensure optimal legibility, the BR V2-92 Military Green shares the same lineage as watches from the Bell & Ross “LUM” collection which are treated with green-coloured Super-LumiNova® C3 to maximise their luminescent qualities. Playing on both the discreet nature of the khaki camouflage dial and its functional design, it is aimed at professionals and daily adventurers searching for a timepiece which is robust and timeless. Faithful to lines from the Bell & Ross Vintage collection, its 41-mm round steel case with a crown guard is equipped with a glass dome, or “glass box”, and a black bi-directional rotating bezel in anodised aluminium to measure short periods.

In a nod to well-known Bell & Ross “Military Type” references, the BR V2-92 Military Green continues this connection both on a technical and stylistic level. The date is displayed in a round window at 4.30 – one of the brand’s signature features – the khaki disc inside being the same colour as the dial. Adventurous and urban, the BR V2-92 Military Green goes back to basics yet continues the great tradition of professional timepieces. 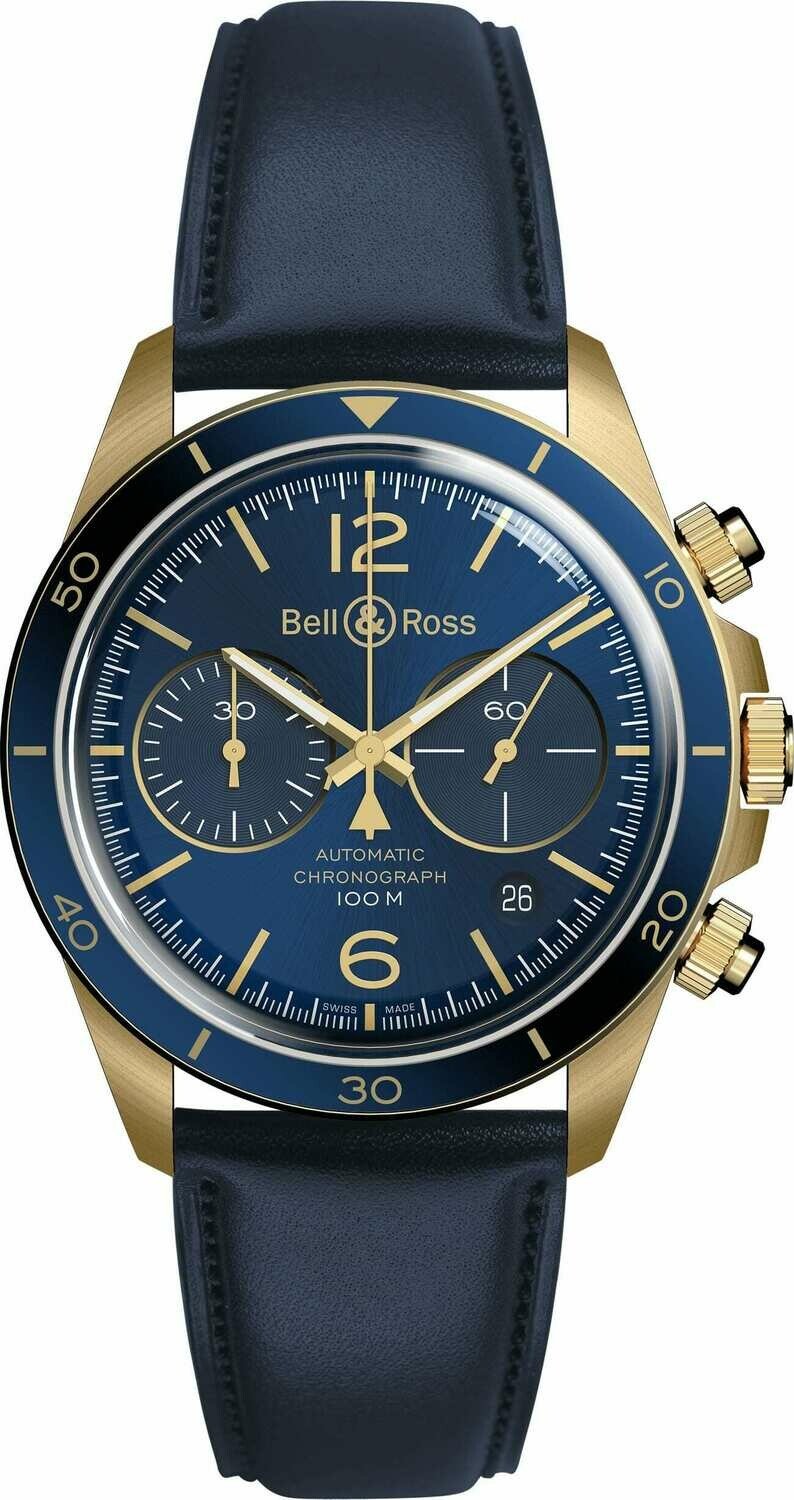 In a nod to the Vintage BR Aéronavale collection, this year Bell & Ross went a step further and unveiled a new BR V2-94 Aéronavale Bronze in a limited edition of 999 pieces that combines functionality and elegance while subtly reflecting the prestigious ceremonial uniform of French naval officers. This elegant chronograph is clearly aimed at lovers of beautiful timekeeping instruments. In stabilised CuAl7Si2 bronze (91% copper, 7% aluminium and 2% silicon), its 41-mm case stands out with its distinctive yellow gold colour. Known for its changing nature that gives it its unique character, bronze – a material cherished by Bell & Ross – provides a whole palette of unique shades. Although stabilised, the material changes over time – as if by magic!

Similar to the other chronographs from the Vintage series, the BR V2-94 Aéronavale Bronze is equipped with a fixed bezel, here in navy blue anodised aluminium. Its ocean blue dial is decorated with gilt metal indices and numerals and baton-shaped skeletonised hands in white Super-LumiNova® for optimal legibility. The functional, ultra-curved “glass box” sapphire crystal reinforces both the classic style of the piece and its resistance. In this sense, the BR V2-94 Aéronavale Bronze meets all the criteria of the military technical specifications intended for such a timepiece. This refined chronograph featuring screw-down pushers will appeal to collectors looking for a model with a vintage feel which evokes the “bi-compax” chronographs from the 1960s which featured two sub-dials. The BR V2-94 Aéronavale Bronze has all the technical qualities of a modern timepiece namely, reliability, robustness, elegance, precision and legibility. 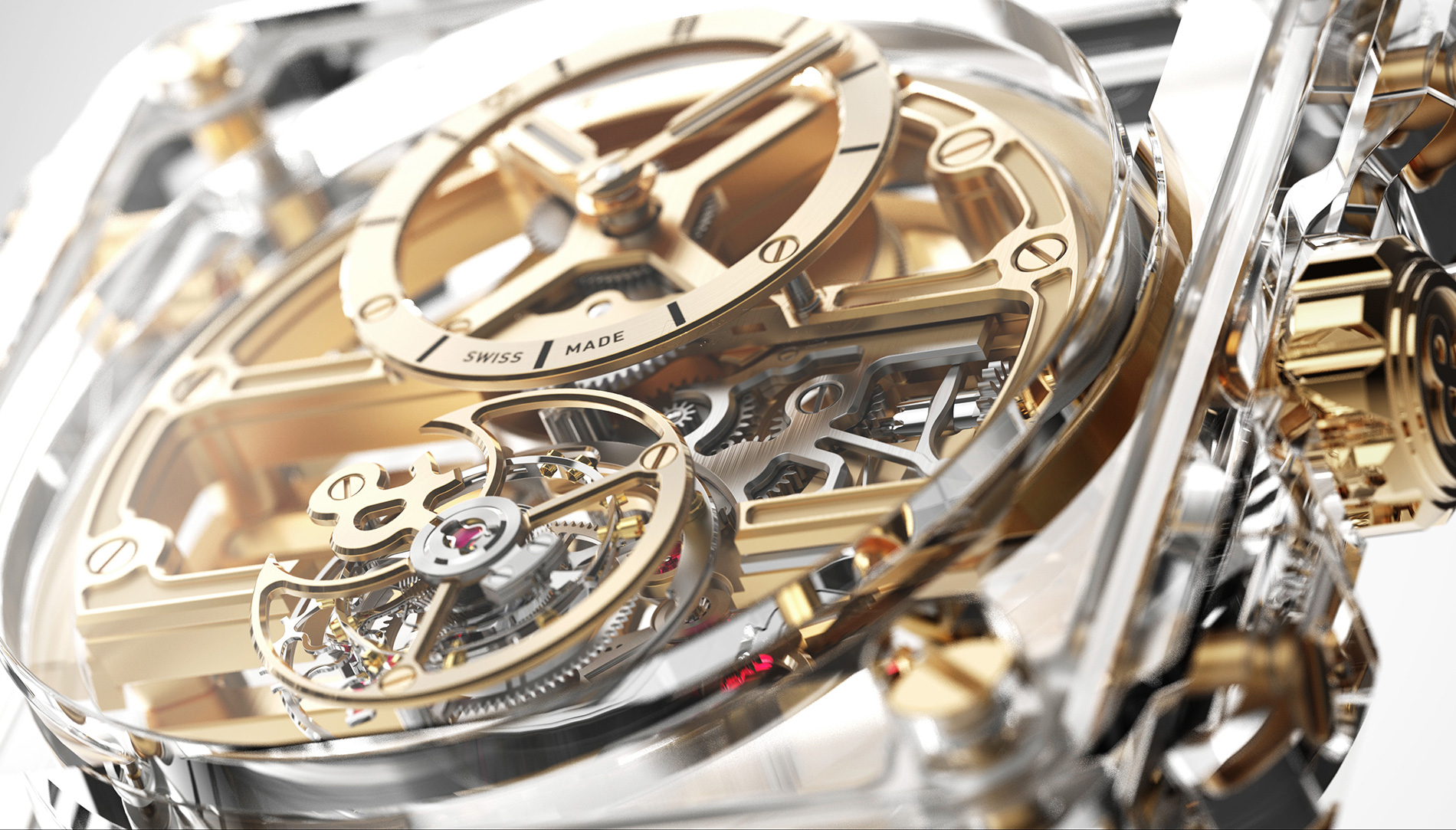