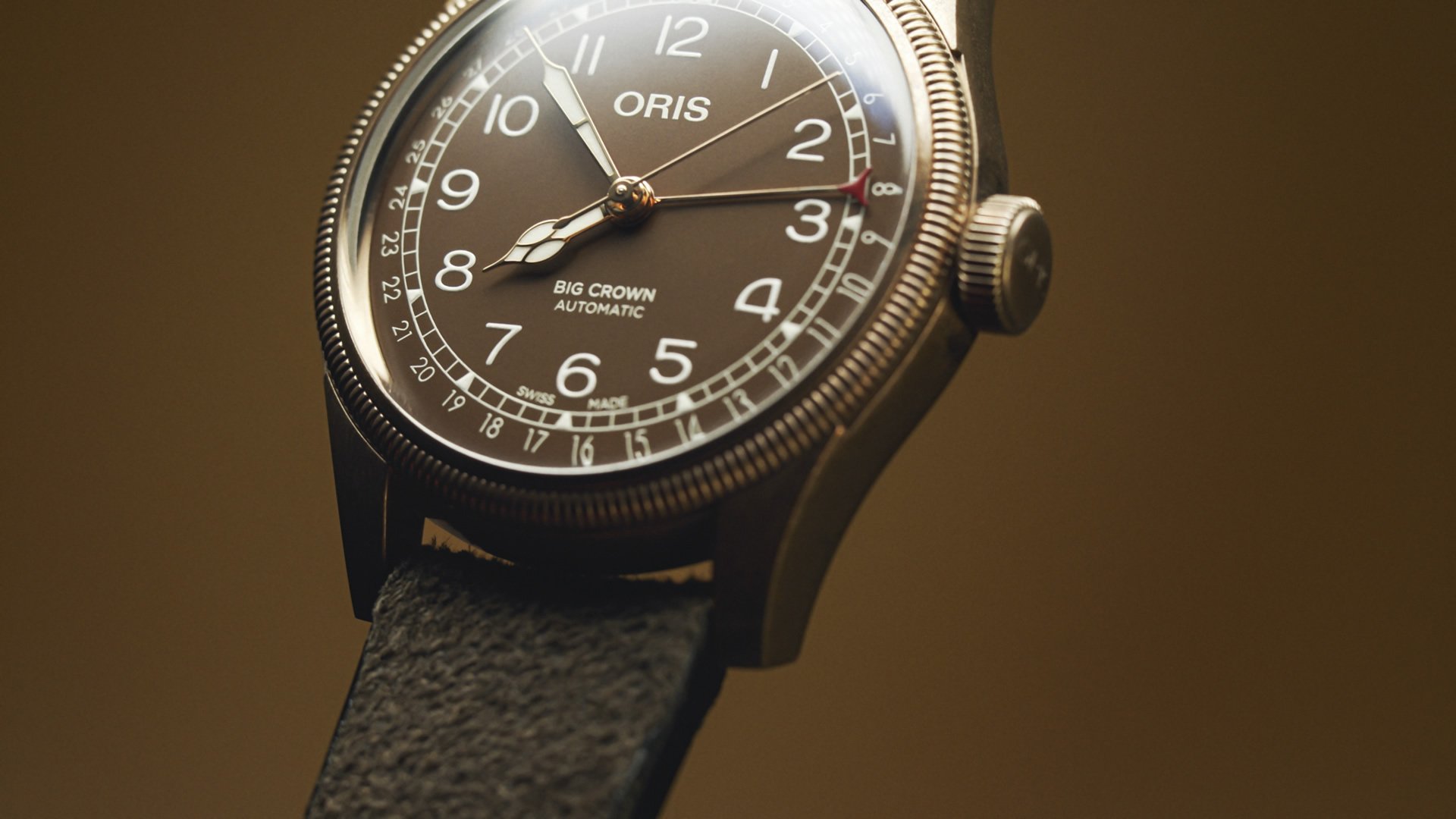 Oris wraps its signature design in warm bronze, an eternal symbol of the role it played in one of watchmaking’s greatest stories

Oris celebrates the uniquely historic role of its signature Big Crown Pointer Date by casing it in solid bronze and using a bespoke finish that makes each bronze dial a one-off. 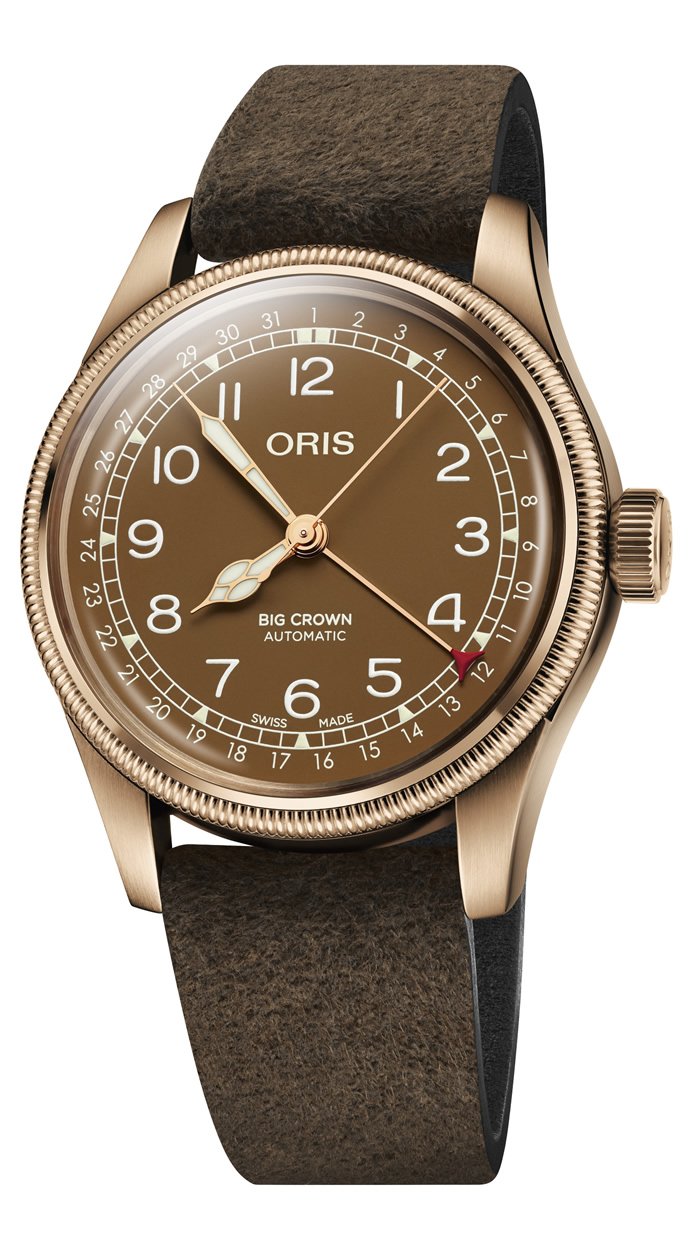 I can be hard to explain why one design has power and value over another. How can it be that a millimetre here or a pen-flick there could have such a significant and lasting impact on a design’s relevance and longevity?

Oris’s Big Crown Pointer Date first entered the Oris collection in 1938, more than eight decades ago. Its creators made a watch for glove-wearing aviators – hence the oversized crown and clear Arabic-numeral dial – but they also made a beautiful object.

‘Beauty drives our decisions,’ says Rolf Studer, Oris Joint Executive Officer. In beauty we find attraction, love even, which drives us to invest. We buy what we love. With a watch, that’s particularly true. Most often, the heart rules the head.’

The Big Crown Pointer Date’s continued relevance owes much to the original design. But it’s also a reflection of its role in Oris’s revival after the 1970s Quartz Crisis, and in the revival of the Swiss watch industry. 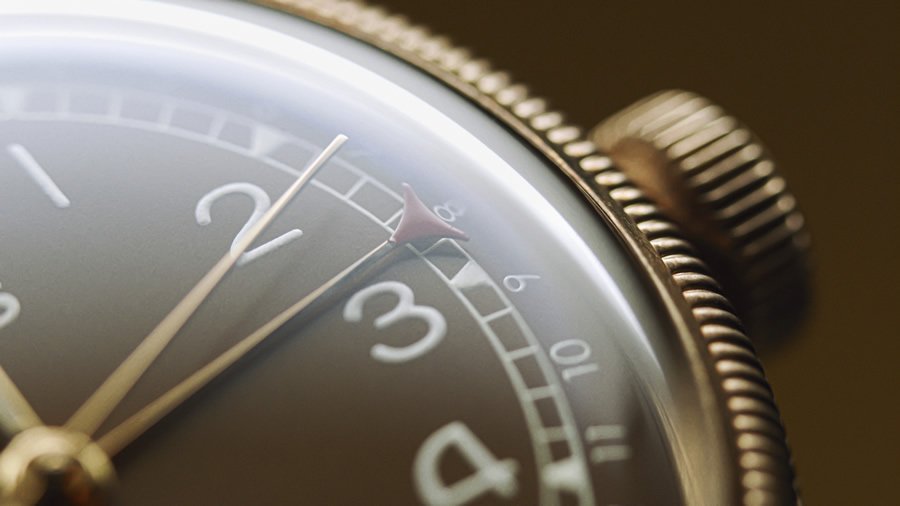 ‘The role of the Big Crown Pointer Date in Oris’s decision in the mid- to late 1980s to rebuild the company with only mechanical watches was critical,’ continues Mr Studer. ‘It had a story, a purpose and an emotional value that the quartz-powered novelties of the day simply couldn’t compete with. It became an Oris signature and a symbol of the Swiss watch industry’s dramatic revival.’

Today, more than 30 years later, Oris is introducing the Big Crown Bronze Pointer Date. The bronze case and dial symbolise Oris’s industrial philosophy and the eternal value of a Swiss Made mechanical watch. The solid bronze dial is chemically treated and coated with a transparent matt lacquer to create a unique finish for every piece (see right), another symbol, this time of the unique status of the watch’s design.

A bronze watch that shows the time and date? Yes, but for many reasons, the historic Oris Big Crown Pointer Date is far more than the sum of its parts

Where would watches, and particularly wristwatches be today without aviation? The dawn of air travel heralded a sea change in industry, global politics, social mobility and many other areas of life. It also fuelled a need for a wrist-worn device that could keep track of time, and therefore other critical navigational measurements, such as position, fuel economy and average speed. 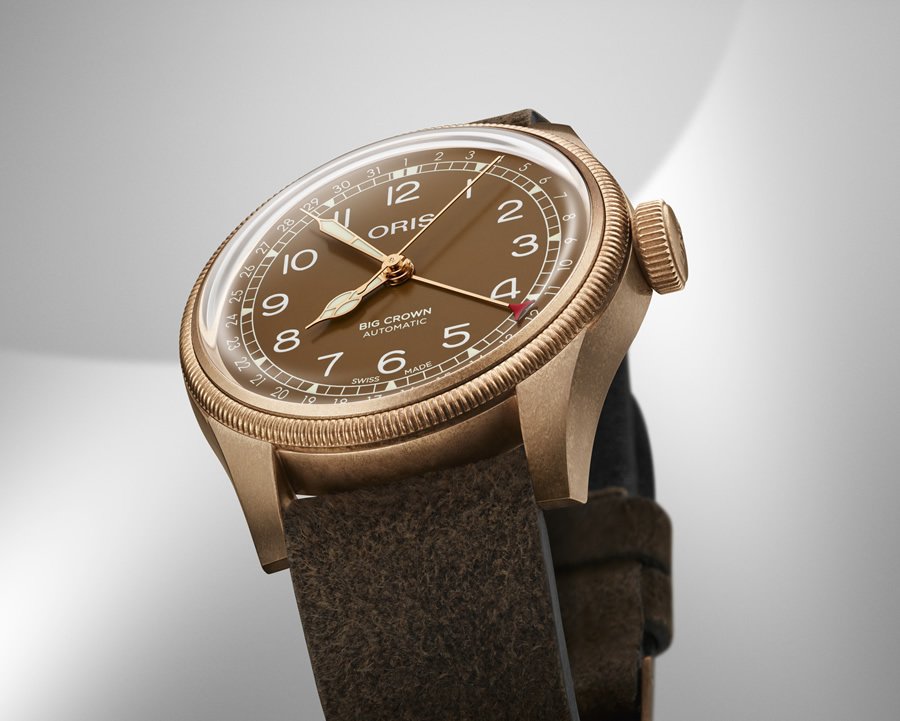 Early wristwatches designed for pilots had to be highly legible, so that every calculation could be done quickly – at a glance. They also had to be easily adjustable, and they had to be robust and reliable, built to withstand the in-flight fluctuations felt in the cockpit. Oris was founded in 1904, and around 1910 made its first watch for pilots. Louis Blériot had flown across the English Channel in 1908. Shortly after, Oris created a pocket watch with an image of a Blériot plane engraved onto the case. That was followed in 1917 by the company’s first pilot’s wristwatch, a clever piece that could only be adjusted when a button above the crown was activated. Two years ago, Oris created a centenary edition of this landmark watch.

War spurred advances in watch design as in aviation. In 1938, Oris produced a watch that would become known as the Big Crown Pointer Date. It had an oversized crown that could be easily operated by a pilot, even when wearing gloves; large Arabic numerals, so the time could be read quickly; a fluted, grippy bezel; and a central hand with a pointer tip that indicated the date. It was simple, logical, useful – and it worked. 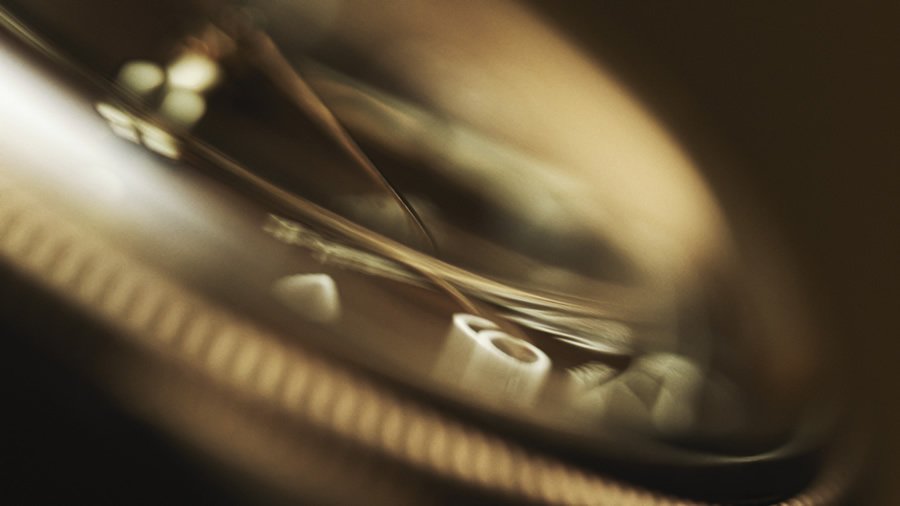 More than 80 years later, the same design principles continue to inform the Big Crown Pointer Date. Over time, it’s been refined with material and mechanical improvements, but its timeless pioneering spirit remains.

Today, the new Oris Big Crown Bronze Pointer Date continues the narrative. Its cased in solid bronze, a material that recalls Oris’s industrial roots and that over time will patinate so it comes to tell its own story. It also celebrates the role the Big Crown Pointer Date has played in Oris’s history. It has never been out of production and has become Oris’s signature piece. Some have even said that without it, Oris might not enjoy the reputation as a high-quality independent Swiss watch company it has today. In short, it sums up the Oris story.