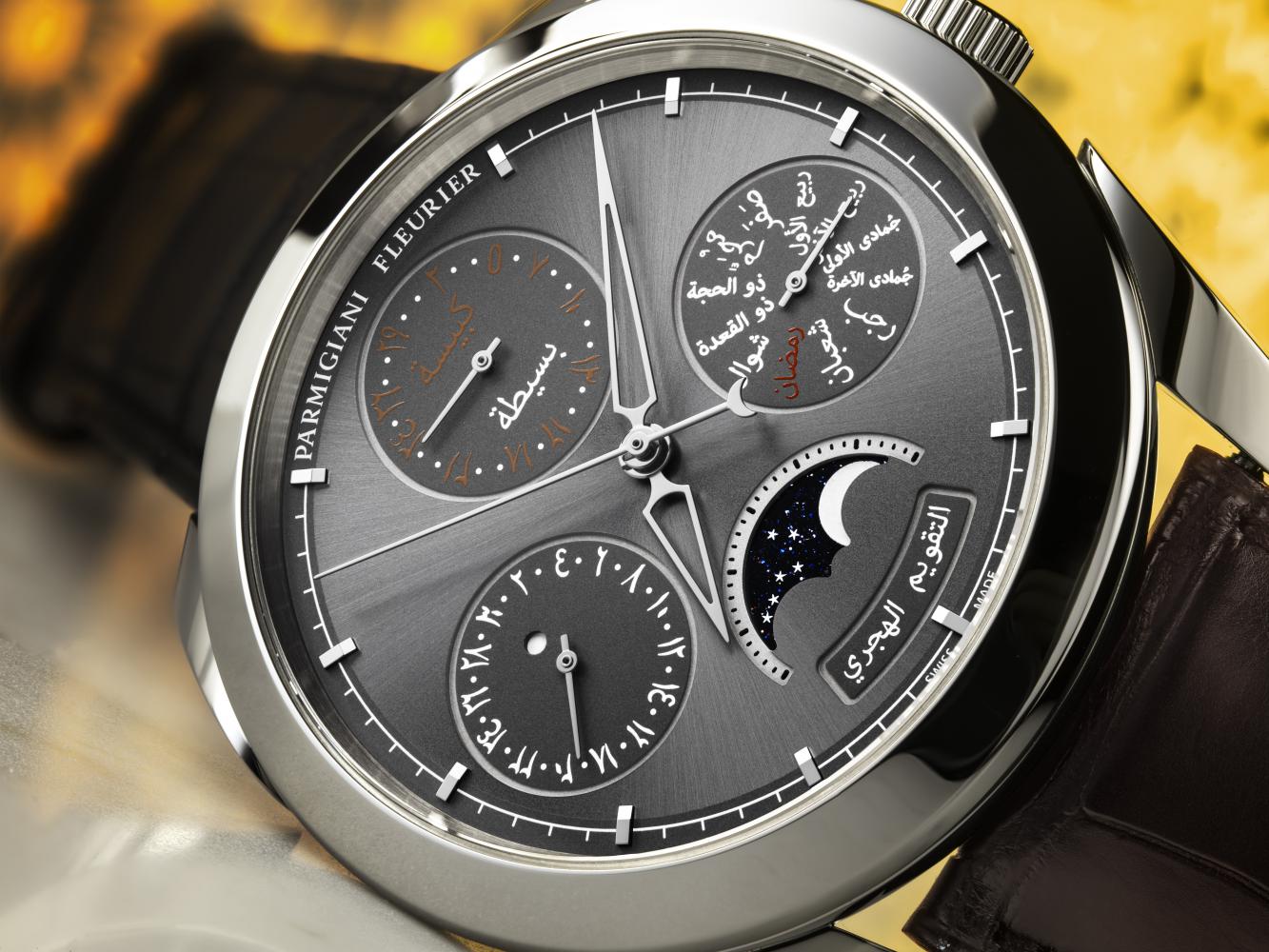 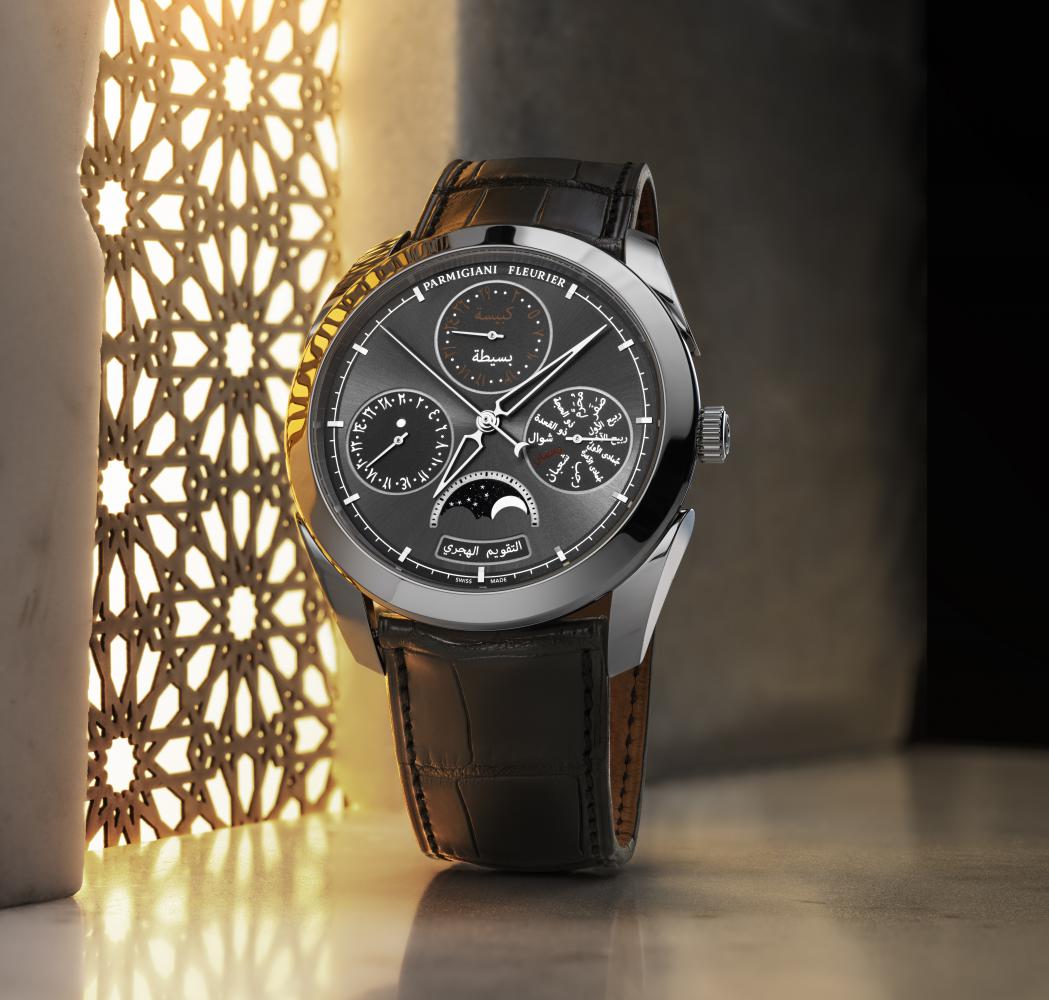 In the Muslim world, the calendar is based on the cycles of the moon. The Hijri or Islamic lunar calendar consists of twelve months of 29 or 30 days – depending on the moon phase- and is used to pinpoint the days for Islamic holidays. In contrast to the solar calendar, which is used in the west, the months of the lunar calendar change annually by a difference of -10 to -12 days. As a result, each month always falls on a different season and therefore varies from the Gregorian Calendar.

The starting point of Islamic time calculations is the emigration of the Prophet Muhammad from Mecca to Medina in present-day Saudi Arabia in the year 622, known as Hijri, and is when the first Muslim community was founded. 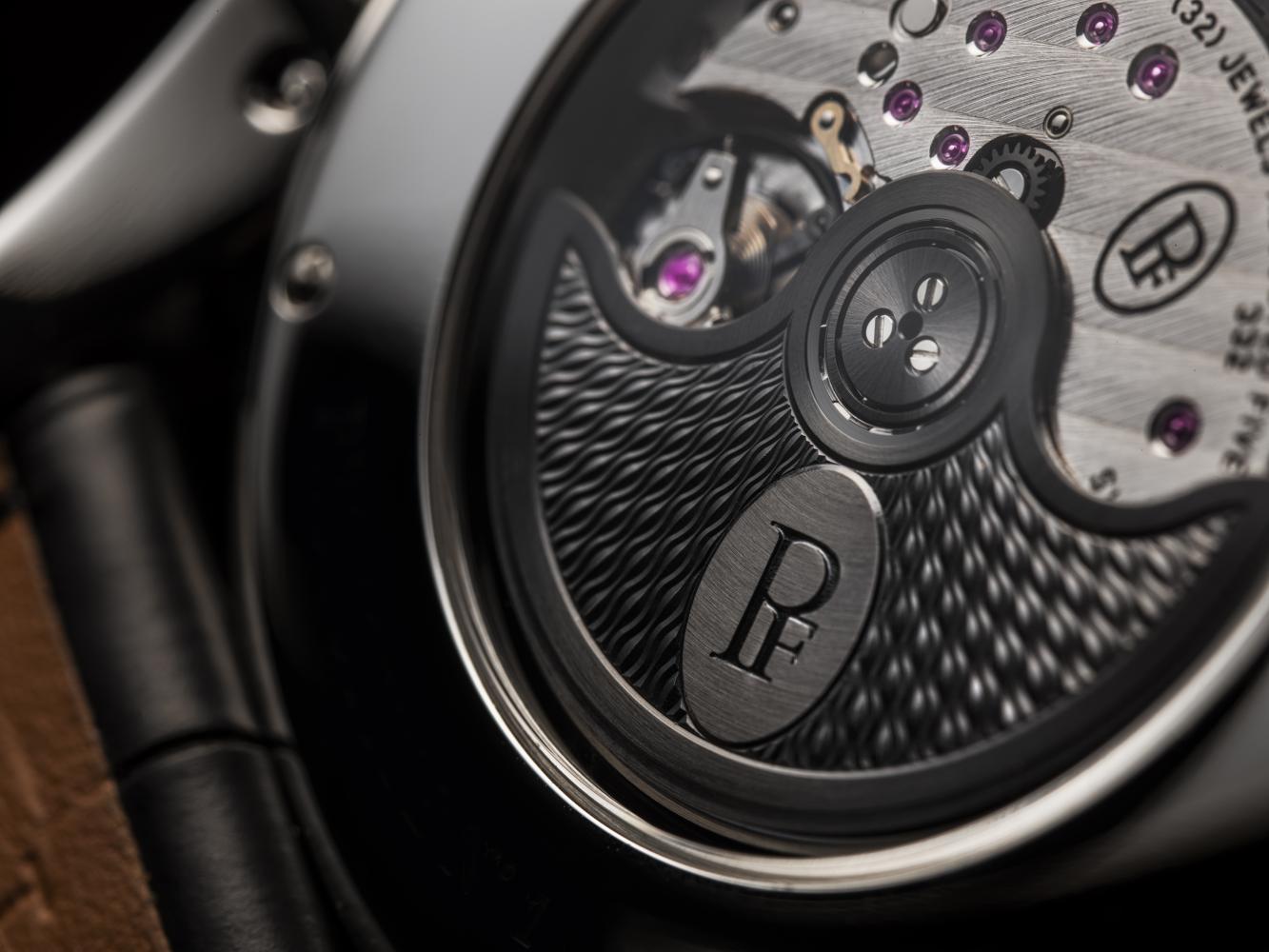 This new piece features a 44.5 mm timepiece with a platinum case, a slate dial and rotor in platinum. It shows the hours and minutes, and date in Arabic numerals, the name and length of the months in Arabic calligraphy, as well as the abundant and the common years. It also features a moon phase in an aventurine sky and a power reserve of up to 48 hours. As seen in all Parmigiani timepieces, every single component of the movement, even the hidden parts, are decorated by in-house specialists. No components were made of gold.

Every detail has been thought of and this stunning timepiece includes Arabic architecture inspired elements- the bridges adopt the shape of growing and shrinking crescent moons and the Rub el Hizb, an Islamic symbol represented by two overlapping squares. In addition, the aesthetic of the Hijri Perpetual Calendar wristwatch is inspired by the purest artistic elements and follows timeless codes often seen in Parmigiani Fleurier collections. The lugs shape remain faithful to the brand’s ethos, designed to be ergonomic and comfortable on the wrist. This world-first is also fitted with a black Hermès alligator strap with a pin buckle. 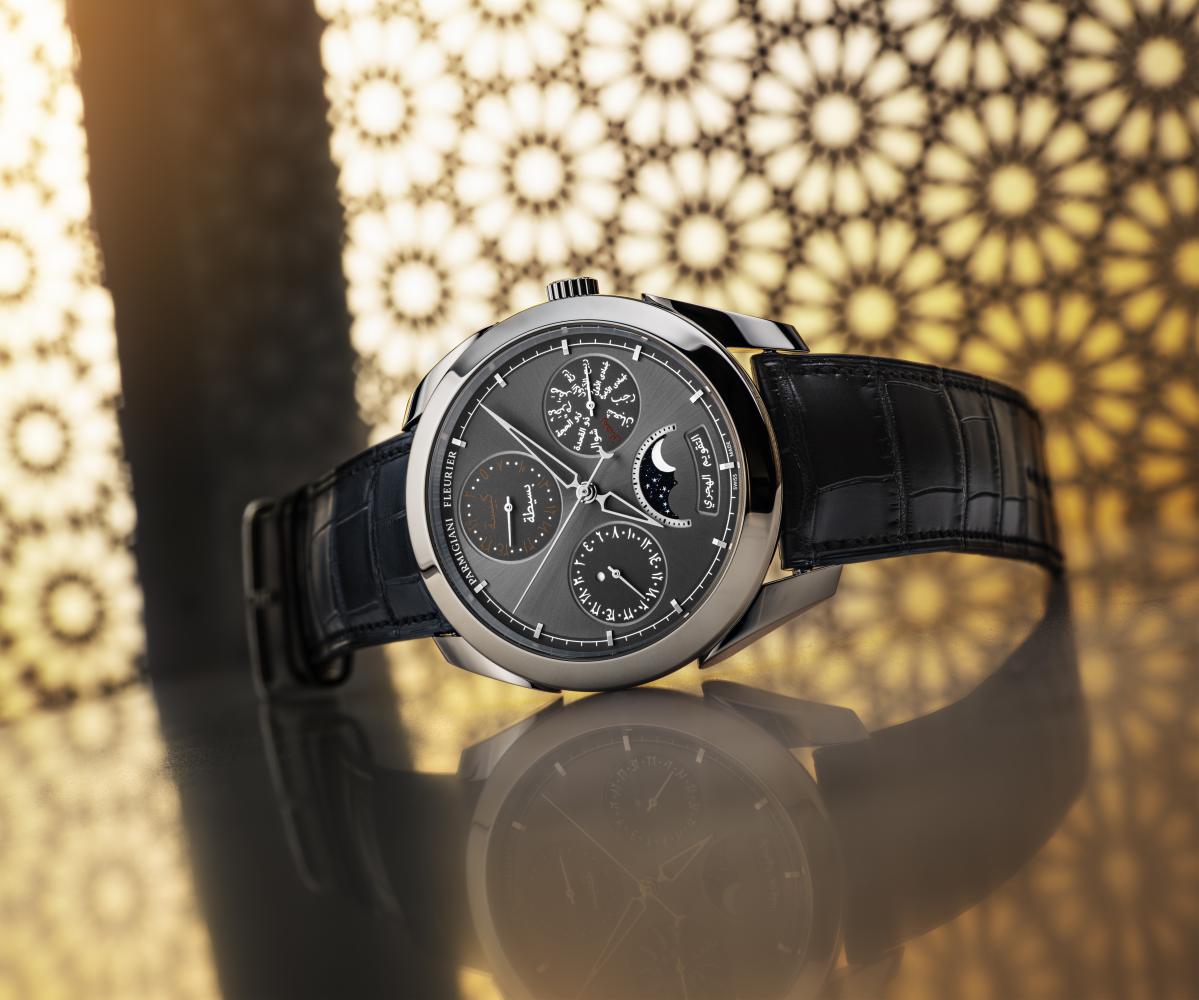 As usual at Parmigiani Fleurier, further customization of the model is possible in order to create a one-of-a-kind timepiece.

The original development of the timepiece dates back to 1993 with the restoration of a pocket watch by Michel Parmigiani, three years before the creation of the Parmigiani Fleurier brand. This led Mr. Parmigiani to the creation of a table clock featuring a Hijri Calendar in 2011- a world’s first as no lunar calendar had ever been designed to operate continuously. This piece of exception was inspired by his work restoring a simple Hijri Calendar. He also worked on a pocket watch dating back to the end of the 18th or beginning of the 19th Century, which featured a solar calendar translated into Arabic. 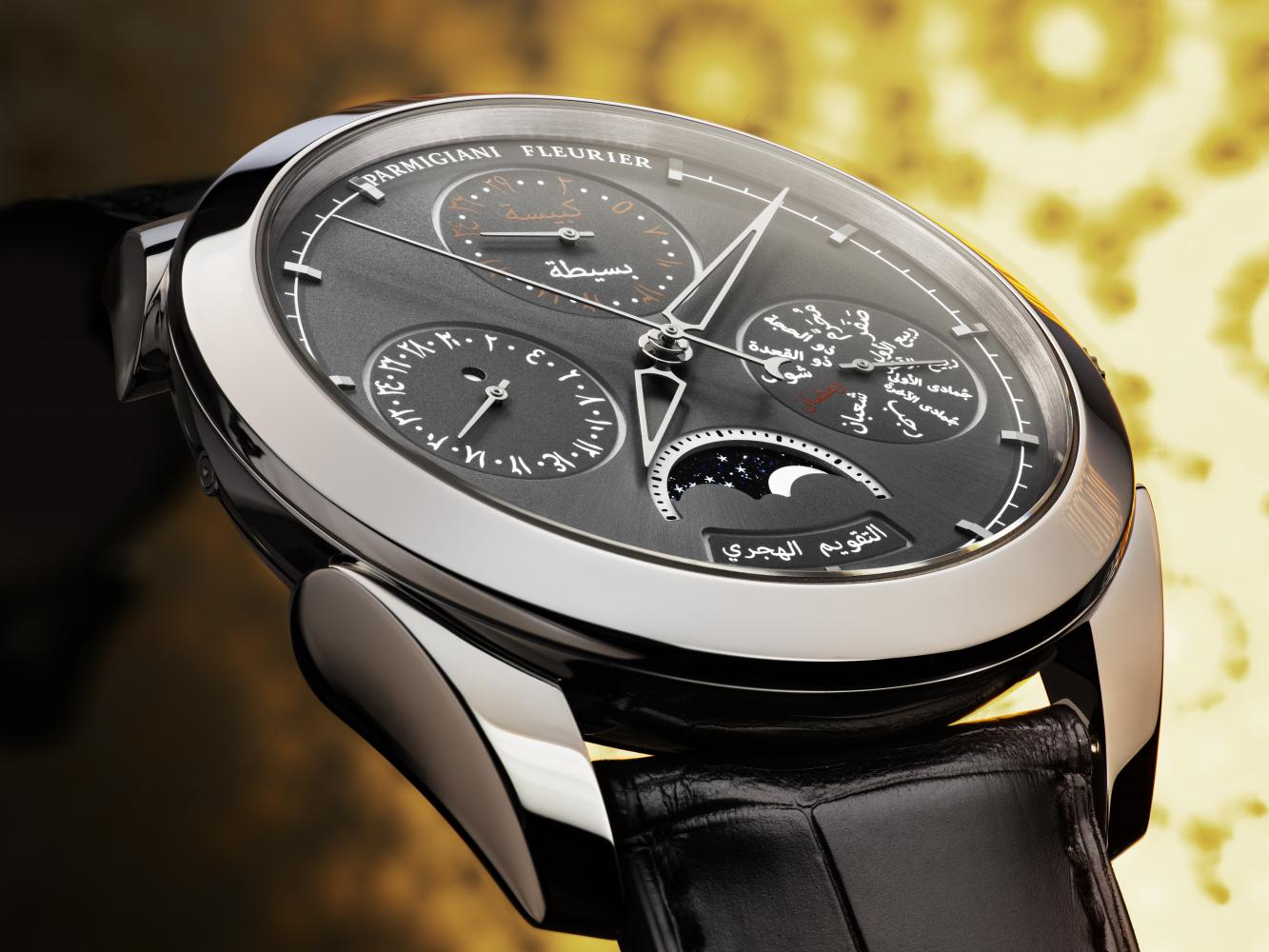 “The calendar is an eminently fascinating watchmaking complication, as it really is the mirror of civilizations”