Jaquet Droz – The Year of the Rat 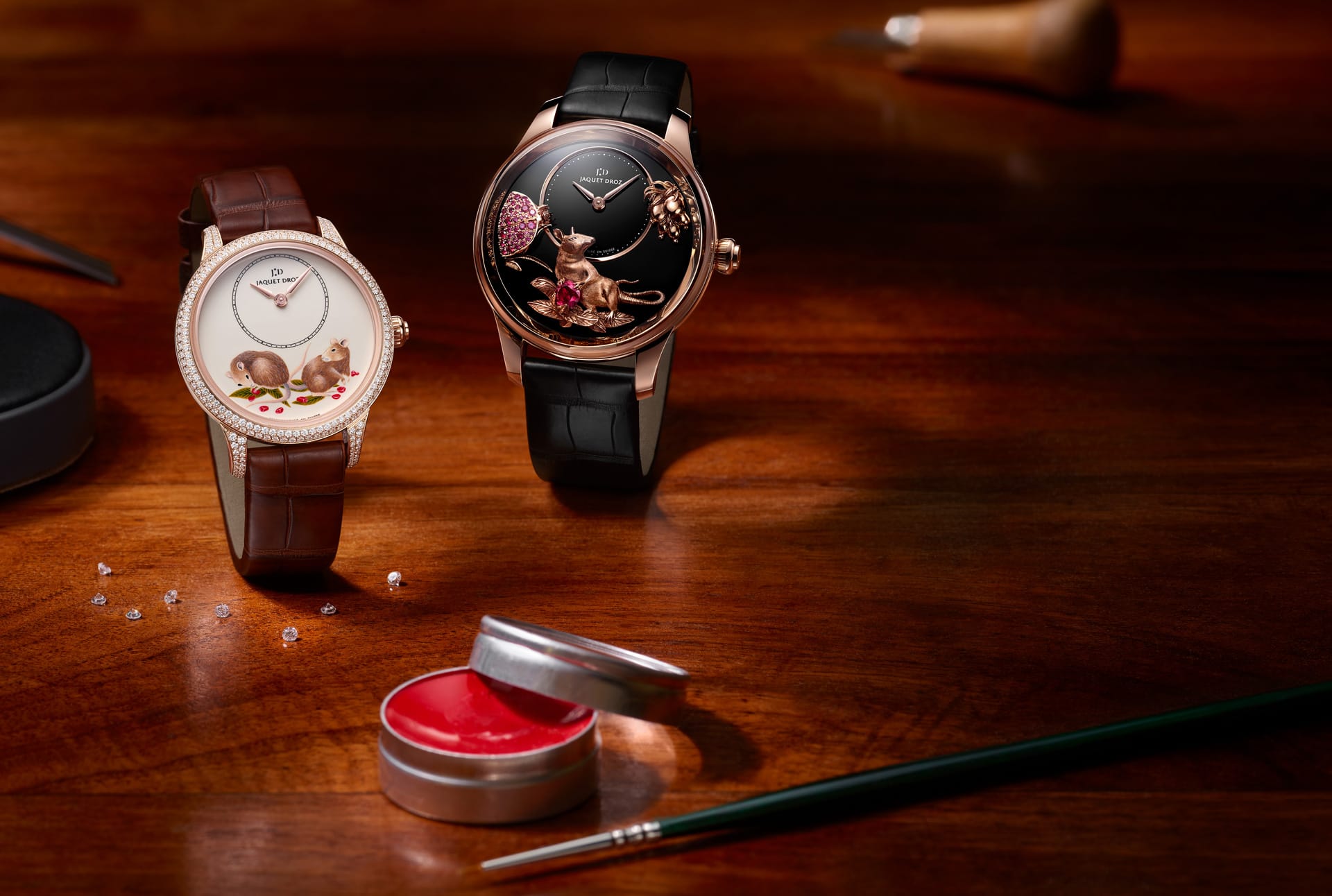 Representing renewal, the Rat is the first sign in the Chinese Zodiac calendar. A symbol of passion and ambition, the sign of the Rat will take center stage in 2020 according to the age-old Chinese calendar. To celebrate this special year, four limited series have been created by Jaquet Droz. 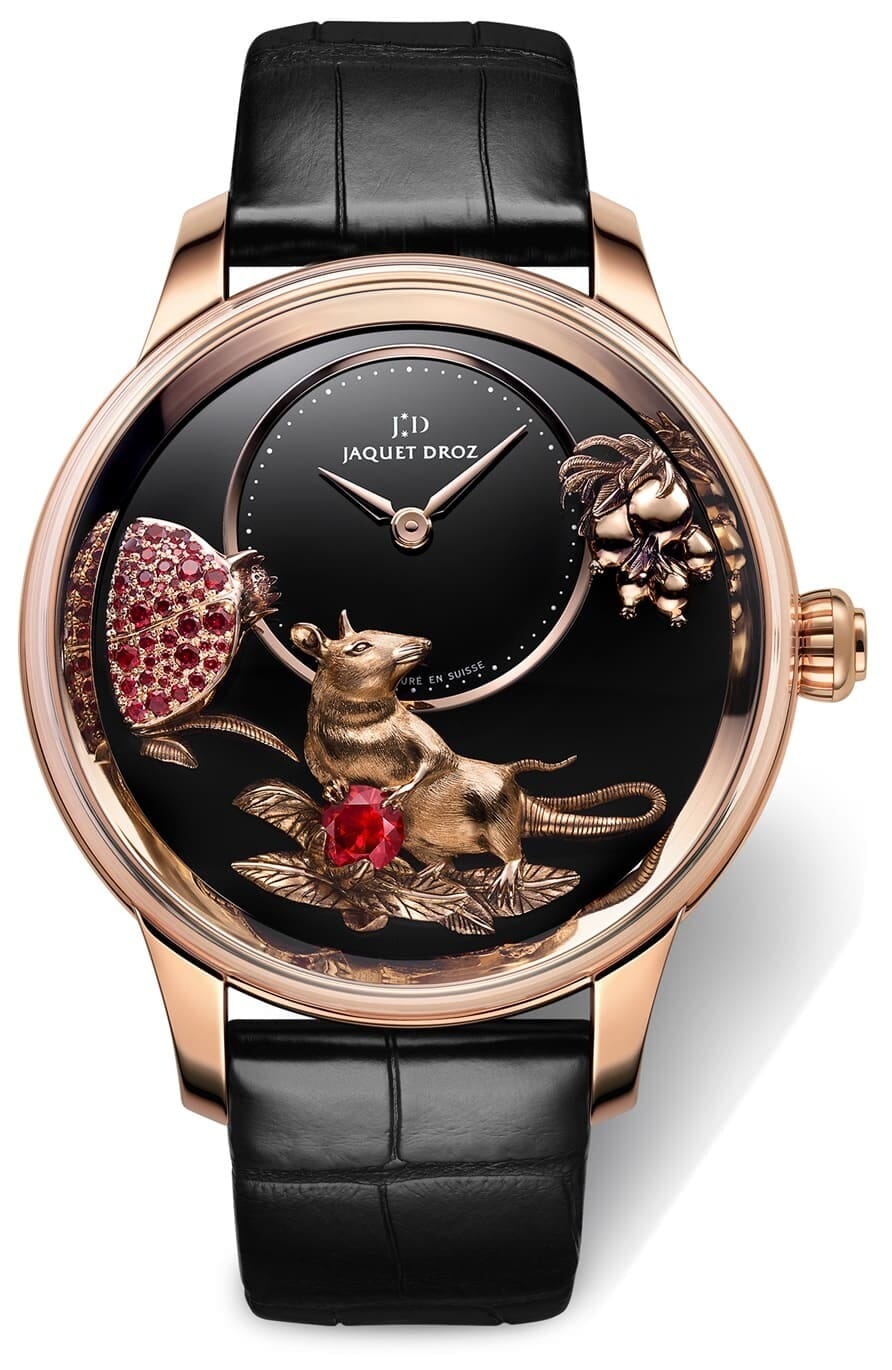 According to legend, the Rat finished first in a great race hosted by the Jade Emperor, the ruler of all gods. The animal is said to have used its wits and speed to finish ahead of animals much more powerful than it, such as the Ox and Tiger, as well as those less agile, such as the Sheep and Rooster. The Rat is said to have won the race – as well as the first place in the zodiac calendar – by crossing a river on the back of the Ox. Just before reaching the shore and the finish line, the Rat jumped off the back of the Ox to win first place.

The Rat has since been synonymous with intelligence, ingenuity and ambition. It is also an animal that is closely associated with wealth: seeing a Rat is an omen of plentiful harvests and represents a sign of prosperity.

Four highly exclusive models have now been revealed which celebrate the pairing of the Rat and the pomegranate. They showcase Jaquet Droz’s Ateliers d’Art, whose work brings naturalistic scenes to life in the true spirit of the brand. The first two models (Petite Heure Minute 35 mm and 39 mm) depict two rats on a bed of leaves dotted with pomegranates, set on a Grand Feu enamel dial. Both variations are produced in red gold, and the 35 mm model is set entirely with diamonds (case and pallet lugs). The case back of both models houses an oscillating weight designed especially for this limited series of 28 pieces. A second scene, engraved in red gold, depicts two rats reveling in a basket of pomegranates, continuing the metaphor of prosperity, abundance and intelligence. 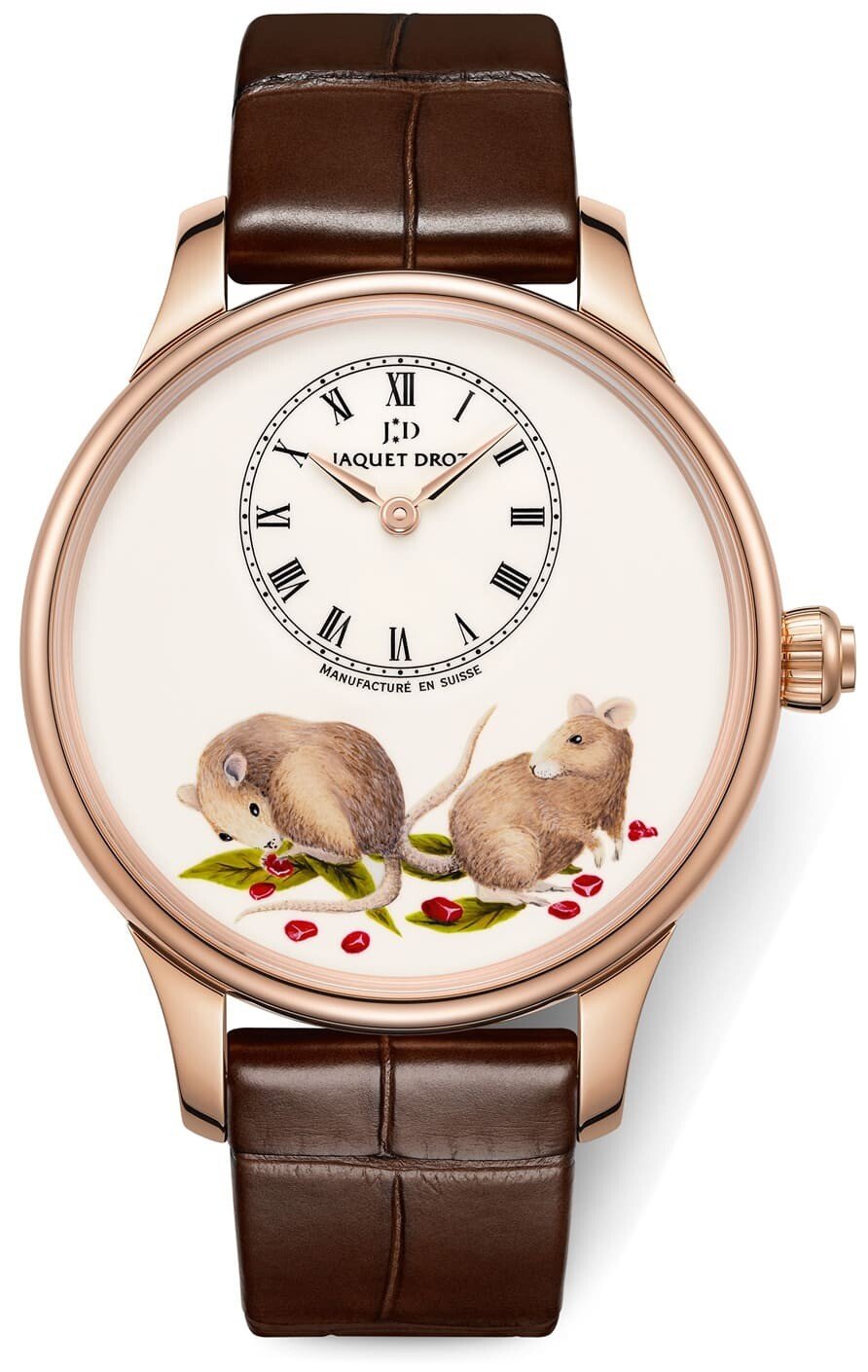 For the 41 mm version, the Petite Heure Minute is available in two other animal-inspired variations that explore the same theme yet feature an onyx dial in a shade of black that is as pure as it is intense. This incredibly deep black serves as the backdrop for a Rat holding a pomegranate in its hands. These two prestigious pieces are crafted in either red gold or white gold (case, rat, hands, and oscillating weight engraving). In addition, the white gold version is set with 272 diamonds that illuminate its ring and pallet lugs with radiant sparkle while creating contrast with the dark intensity of onyx.

Ivory Grand Feu enameling and miniature painting, techniques mastered by Jaquet Droz artisans, are the main features of the next two pieces. Both cases are in 18kt red gold, in 39 mm or 35 mm sizes, and are limited to 28 pieces each. The smaller size’s case is set with 232 diamonds (1.23 carats). 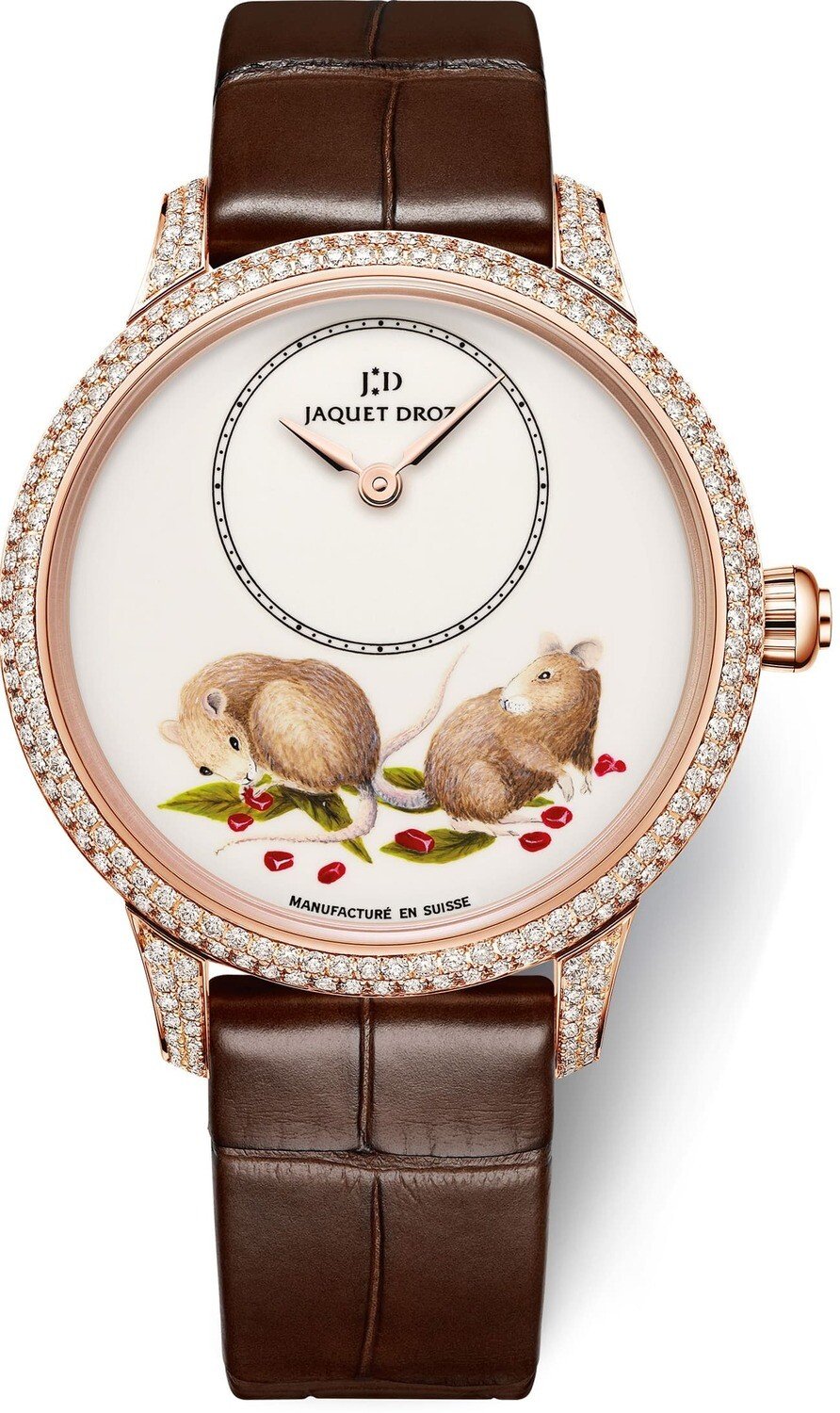 For each of these versions set with jewels, pomegranates are symbolized by rubies, which are arranged in a snow setting to depict multiple arils at the 9 o’clock position, while one larger ruby is used for the seed in the Rat’s hands. This combination of precious materials (diamonds, gold and rubies) reinforces the natural qualities of the Rat, a passionate, ambitious, creative animal, and a symbol of prosperity. Each of these creations has been issued in a strictly limited edition of eight pieces, in keeping with the purest tradition of Jaquet Droz’s Numerus Clausus artistic creations.

“Some watches tell time. Some tell a story.”