Jaguar Classic recently re-started production of the iconic 1950s D-type race car in Coventry, 64 years after the first examples were…

Jaguar Classic recently re-started production of the iconic 1950s D-type race car in Coventry, 64 years after the first examples were built. In 1955 Jaguar planned to build 100 D-types but only 75 were completed; Jaguar Classic is now fulfilling the company’s original ambition by creating 25 all-new, period-correct sports cars. 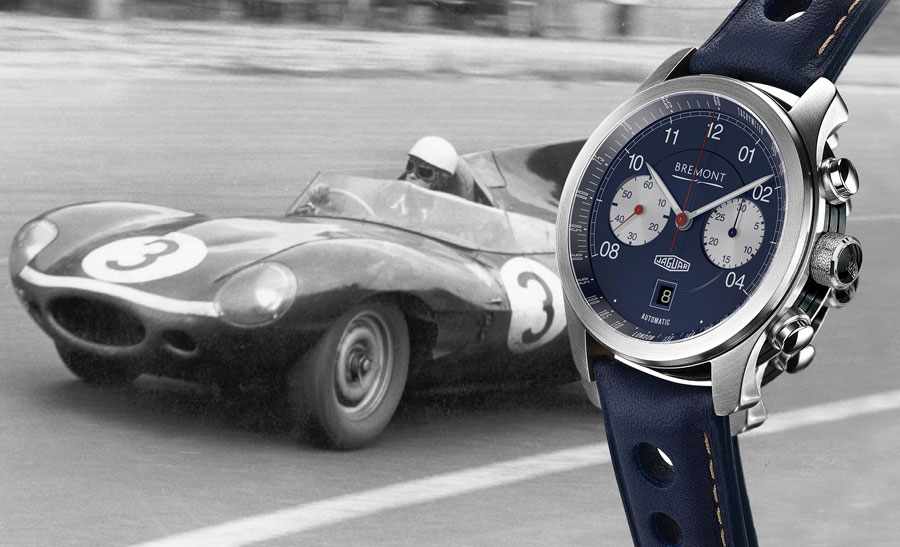 The triple Le Mans-winning D-type is the third Continuation vehicle to come out of the Jaguar Classic workshops, following six missing Lightweight E-types completed in 2014-15 and nine XKSSs built in 2017-18.

To celebrate this British racing icon, and as an extension of Bremont’s previous collaborations with Jaguar (the first of which dates back to 2014), the British watch manufacturer has designed a mechanical chronograph that sublimely transports the wearer back to this golden era of motorsport. 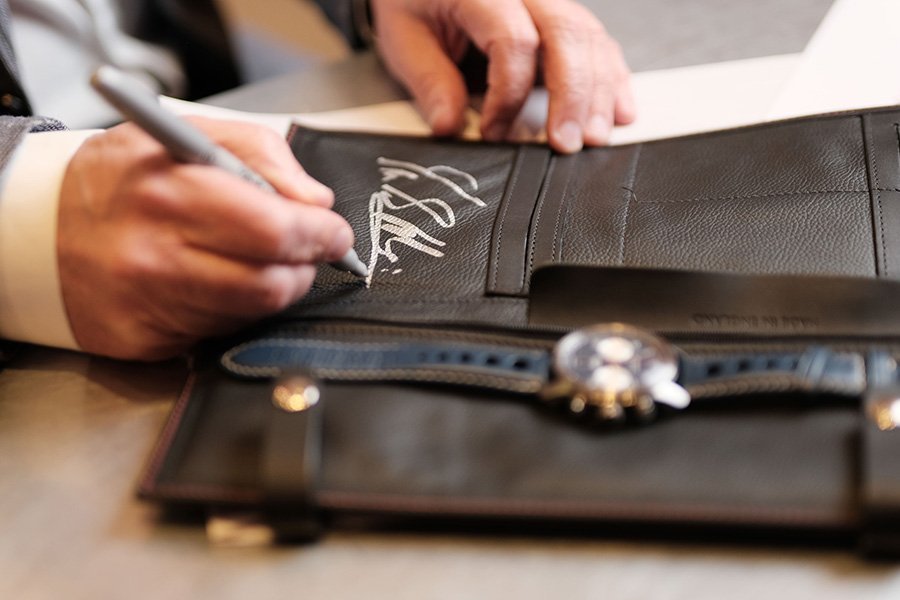 Bremont Co-Founder Nick English said, “The Jaguar D-type is a truly iconic competition car that is just as remarkable today as it was when it was first produced. It has an outstanding record in the world’s toughest motor races due to its robust engineering, something we champion at Bremont. Continuing its legacy by completing the original planned production is very special indeed and we’re delighted to be celebrating with the launch of our new Limited Edition”. 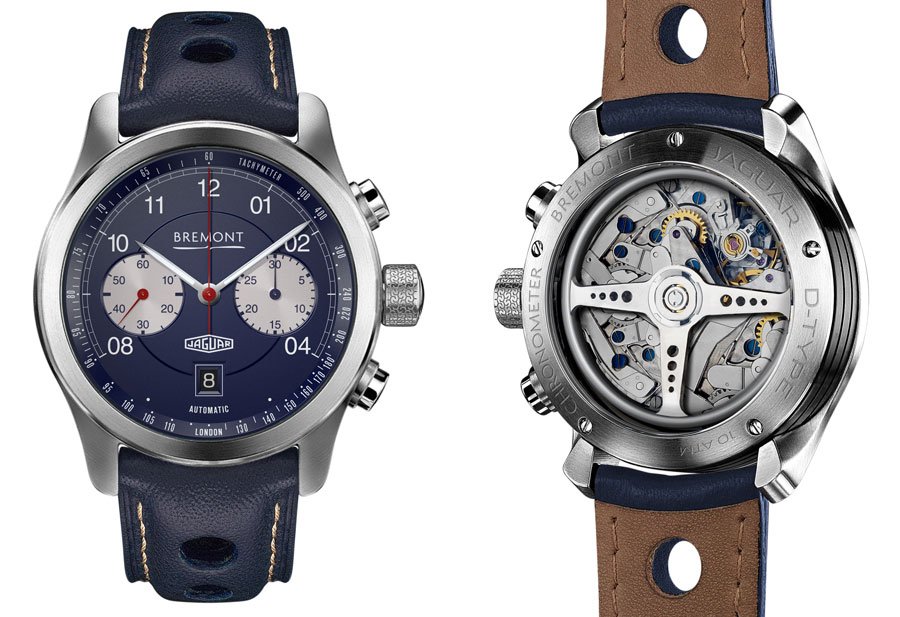 As the D-type was classified as a 300 bhp car, the new timepiece will be limited to only 300 pieces. The blue dialled bi-compax chronograph (inspired by pantones of the Ecurie Ecosse Jaguar race team) has brushed nickel sub-dials and a Tachymeter dial ring with its chronometer rated movement housed in a 43mm satin finished three-piece Trip- Tick case. The large exhibition sapphire case back shows the beautifully finished mechanical BE-50AE movement and the very intricate Jaguar steering wheel inspired rotor. The watch crown has the original Dunlop tyre tread etched into it and the heritage Jaguar logo finished beautifully in enamel on its end. 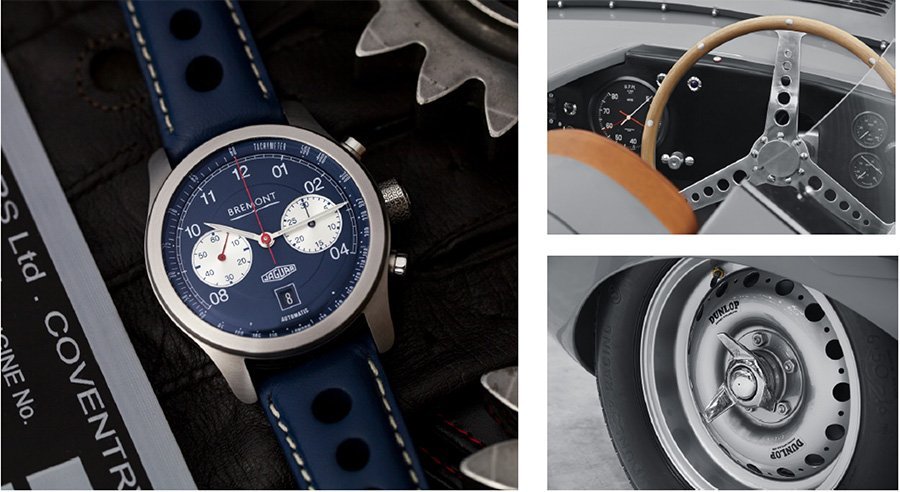 The Bremont D-type watch will be set on a blue racing calf-skin strap. Ian Callum, Design Director for Jaguar and British design icon, will be signing the packaging for this exclusive model. Callum remarks, “The Bremont D-Type chronograph is inspired by one of the most dramatic and beautiful sports cars in history – a sports car which is a true embodiment of Jaguar’s racing heritage. As exciting today as it was in the 1950s, its story continues to be told and this iconic car deserves a timepiece to match. The Limited Edition perfectly captures the D-Type’s mechanical beauty and subtly nods to the cars’ performance – a true driver’s companion”.

The D-type, which won the Le Mans 24 Hours race three times between 1955 and 1957, was powered by the six-cylinder XK engine. Jaguar Classic experts’ painstaking research, with exclusive access to original Jaguar engineering drawings and records, ensures each new D-type will be built to the authentic specifications laid down by competitions manager Lofty England and his engineers in the 1950s. D-type clients can choose either 1955-specification Shortnose or 1956-spec Longnose bodywork. Although sharing many of the mechanical components of its C-type predecessor, the D-type had an innovative monocoque construction and state-of-the-art aerodynamics designed by aeronautical engineers, including its vertical fin or stabilizer.

Jaguar’s heritage of elegant design and breathtaking performance has excited and delighted the world for 80 years. Today’s world-class Jaguar family comprises the award-winning XE, XF and XJ saloons, the dramatic F-TYPE sports car, the F-PACE performance crossover – the fastest-selling Jaguar ever, the new E-PACE compact performance SUV and now I-PACE, the all-electric performance SUV that puts Jaguar at the forefront of the electric vehicle revolution.

Bremont is an award-winning British luxury watch brand, manufacturing mechanical watches in Henley-on-Thames, England. Bremont is making considerable investment with its UK watch making and manufacturing and at the end of 2014 launched a new Parts Manufacturing Facility which saw the firm starting to produce its own case and movement components. Cofounded by brothers Nick & Giles English in 2002, Bremont has made a substantial impact on the watch making industry in a very short period of time. The brand remains true to its original principles of: aviation and military, British engineering and adventure. As well as manufacturing watches for some of the most exclusive military squadrons around the world, Bremont continues to play an influential role in revitalising the British watch industry, the birthplace of numerous timekeeping innovations still used today. The brand is now in the top handful of chronometer producers in the world.