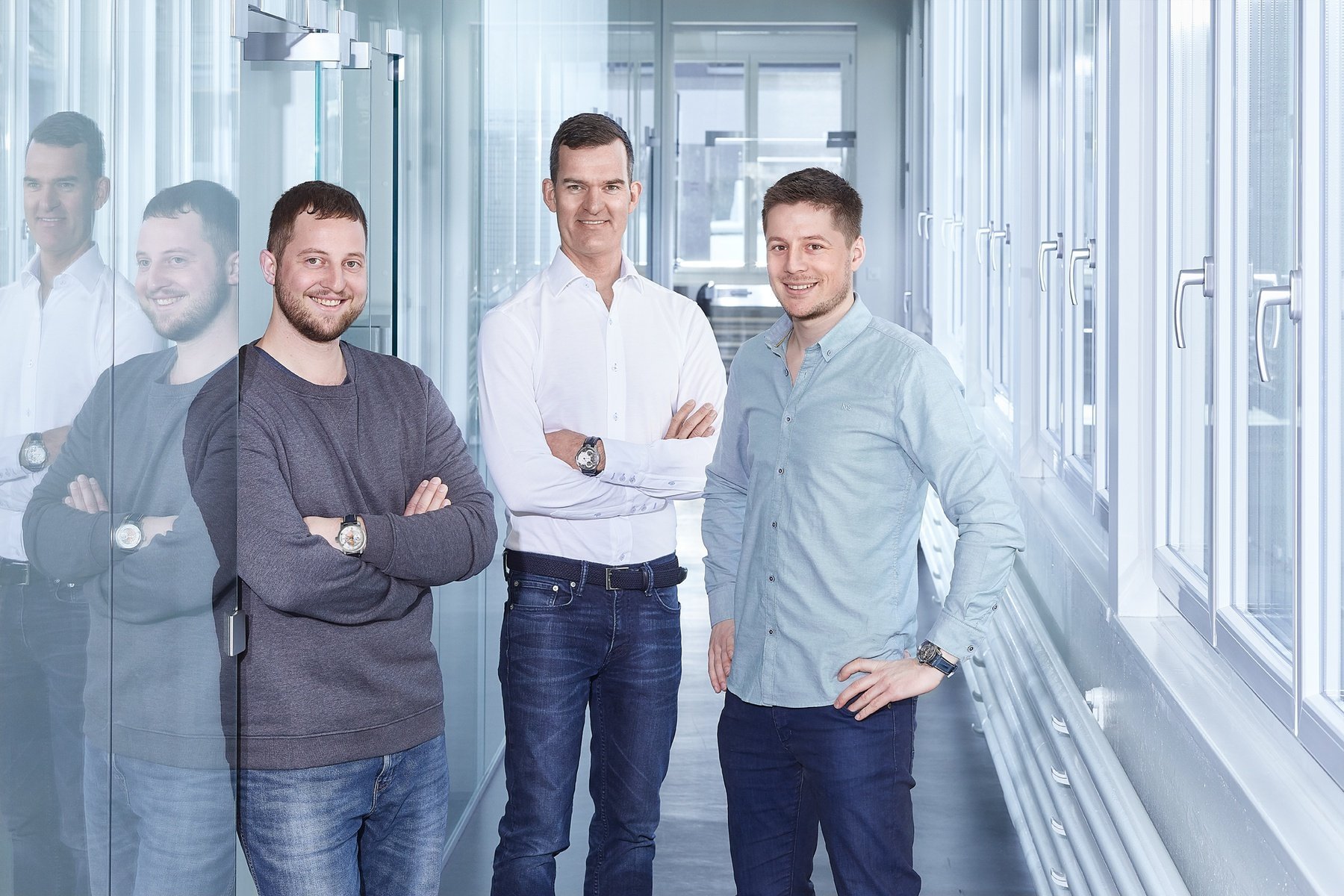 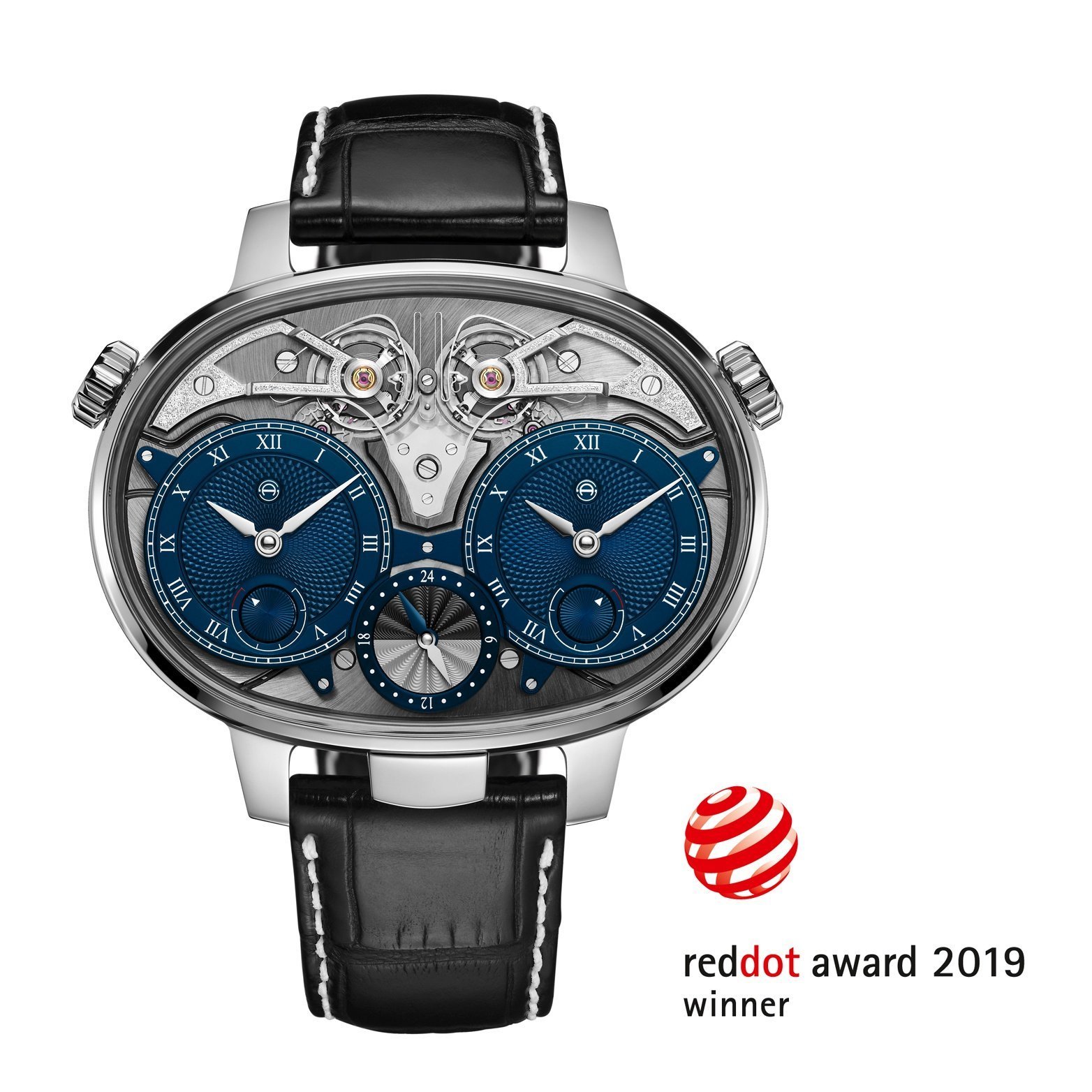 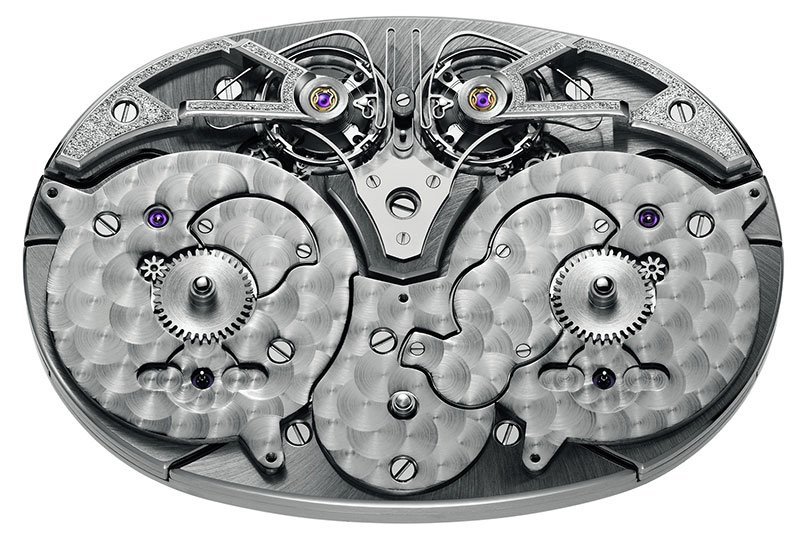 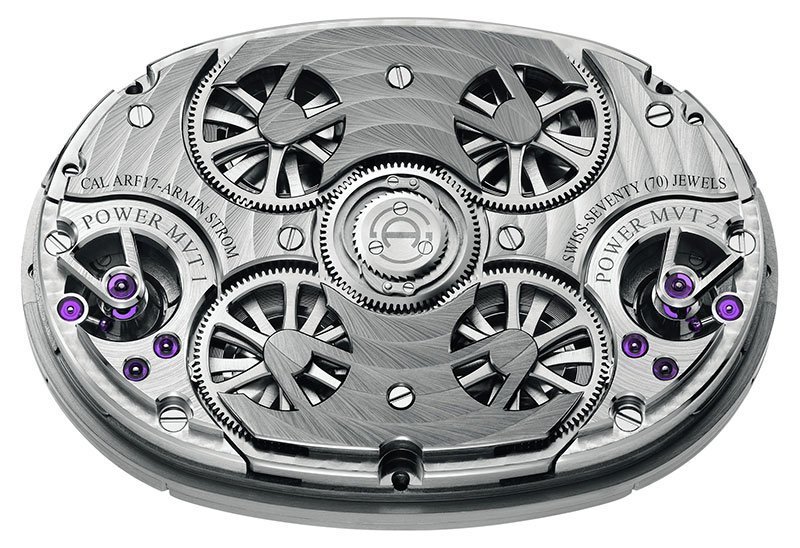 Two movements side by side naturally led to the oval-shaped case never has form followed function in such a compelling and mechanically beautiful way.

Armin Strom’s Dual Time Resonance contains more than just great mechanical design; this groundbreaking timepiece comprises an innovative, sophisticated and patented mechanism created for the pursuit of precision: the eminently visible animated resonance clutch spring that connects the two oscillators, the most sensitive part of a watch’s movement, in order to improving the watch’s precision using the phenomenon of resonance, while synchronizing the two independent movements.

“We are highly honoured by this award. We are proud to join the ranks of exceptional prize-winners”, Armin Strom Co-Founder and technical director Claude Greisler, commented. The jury of internationally recognized experts rewarded the force of innovation and technical sophistication which make the Dual Time Resonance an extraordinary timepiece. “As a young and independent manufacturer we were particularly happy to accept the prize for a phenomenal mechanical watch. We are grateful to the jury for this award and wish to thank all our employees for their dedication, vision and passion,” Serge Michel, Founder of the manufacture, adds.

The Red Dot stands for top achievements in design all over the world. The sought-after seal of quality is awarded to companies that bring products to the market, which set global standards in terms of their attractive design, ease of use, and functionality. In 2019, the prize winners were selected by a prestigious jury with some 40 members. It is made up of independent designers, professors and professional journalists who assess the products in an evaluation process lasting for several days. More than 5,500 products from 55 different countries were entered this year. The winners will officially be announced at a prize ceremony and gala on 8 July in Essen Opera House.

Any body in motion causes vibrations in its surroundings. When another body with a similar natural resonant frequency to the first receives these vibrations, it absorbs energy from it and starts vibrating at the same frequency in a sympathetic manner. For example, a trained singer can hold a note causing a tuning fork tuned to the same frequency to vibrate.

For the oscillators to be able to synchronize with each other, they have to be closely tuned. A small child trying to synchronize steps with an adult is unlikely to synchronise for more than a few steps as the systems are two dissimilar to resonate.

In horology, the phenomenon of synchronized motion has fascinated watchmakers since the time of Christiaan Huygens (1629-1695). Huygens, inventor of the pendulum clock, was the first to discover the resonance of two separate pendulum clocks, which he logically surmised should keep slightly different time. When hung from a common beam, however, the pendulums of the adjacent clocks synchronized; subsequent researchers confirmed that the common wooden beam coupled the vibrations and created resonance. The two pendulums functioned as one in a synchronous manner. In the eighteenth century, Abraham-Louis Breguet demonstrated his mastery of the physics with his double pendulum resonance clock.

An outside shock slowing down one of them increases the speed of the other one by the same amount; but both will strive to get back in resonance, averaging and minimizing the effects of the outside influence as they find their rhythm. What was true for Huygens and Breguet’s clocks is just as true for Armin Strom’s wristwatch.

The advantages of resonance are threefold: 1) stabilizing effect on timekeeping (better accuracy); 2) conservation of energy (think of a professional cyclist riding in the shadow of another cyclist in a racing situation); and 3) reduction of negative effects on timekeeping accuracy due to outside perturbation such as shock to the balance staff, which in turn keeps the rate more stable (better accuracy).

While the advantages of resonance have been known for centuries, only a handful of clockmakers and watchmakers have created timepieces deliberately and successfully exploiting the phenomenon of resonance, including Antide Janvier (1751-1855) and Abraham-Louis Breguet (1747-1823). And, now, Armin Strom.