BUGATTI TYPE 390 An engine block on the wrist 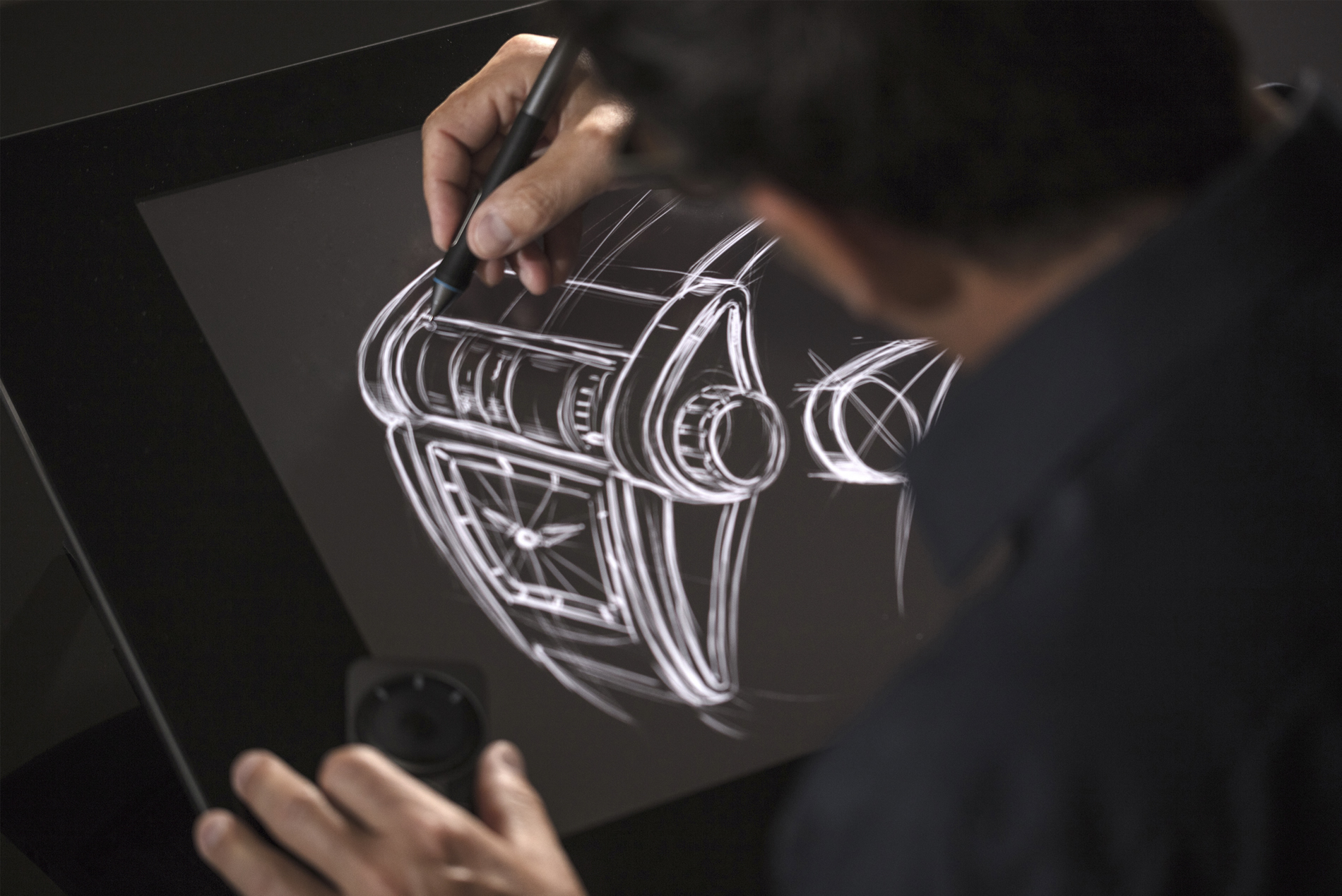 Incredible power, reliability and performance: qualities which come together to create the magic and unique character of the Bugatti Chiron, “the world’s most powerful and fastest car”, the latest creation from the Molsheim-based luxury car manufacturer. The transmission of information from the tubular structure to the perpendicularly positioned dial is made possible thanks to a worm screw. Moreover, the modular construction of this movement means that it can be removed from its housing just as an engine would be removed from a supercar for important modifications. It is true to say that, just like the supercar which inspired it, the Parmigiani Fleurier Bugatti Type 390 has a lot going on under the bonnet!

A true phenomenon in the traditional watch design landscape, Parmigiani Fleurier’s new Bugatti Type 390 is primarily an engine block on the wrist. No frills, no purely decorative elements: everything is focussed on performance, on the essentials. “We have implemented technology right where it is needed”, explained the manufacturers. That is to say, everywhere – or very nearly – but always with the end goal in mind: performance and reliability. 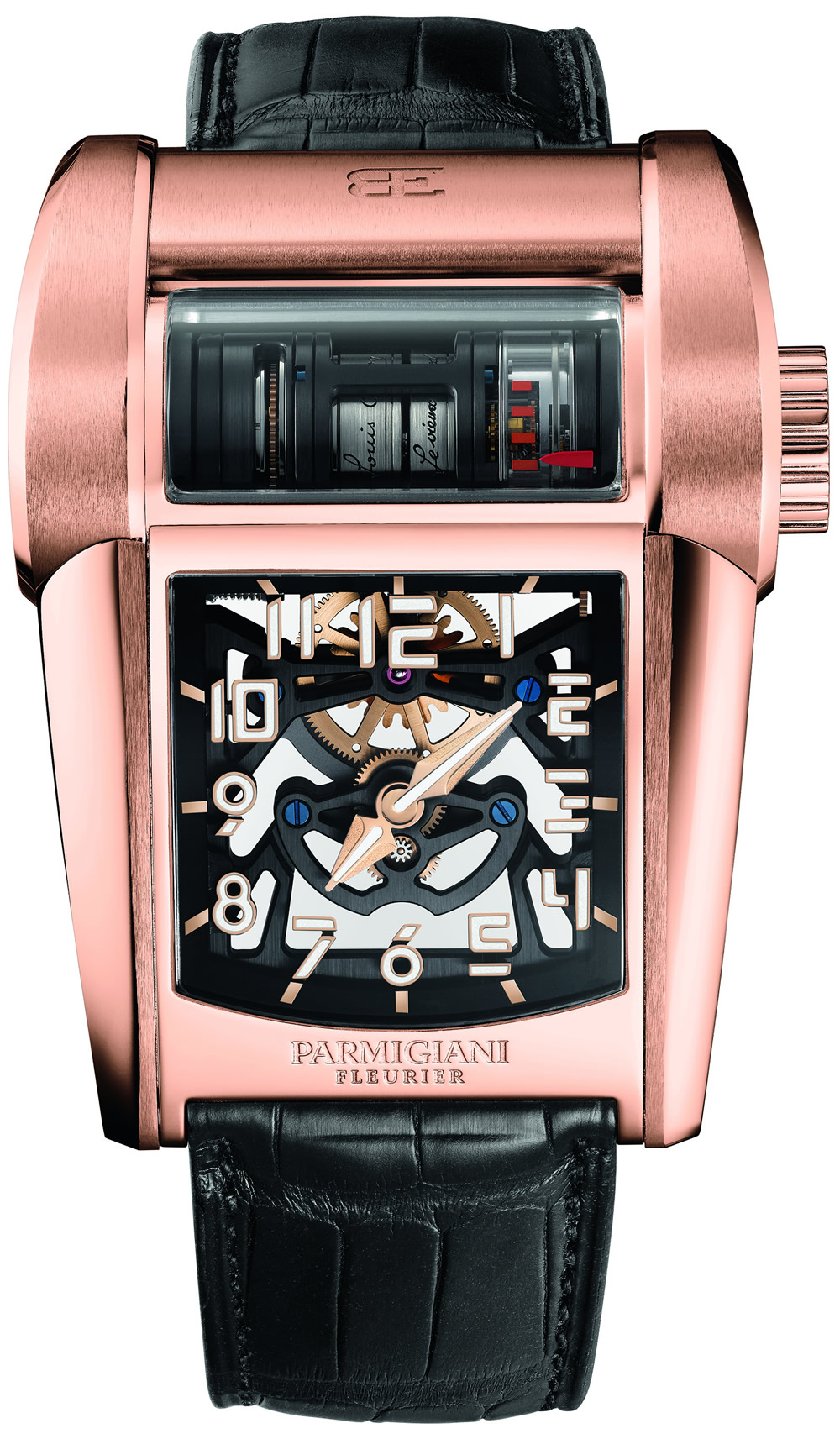 This same mindset has prevailed since the start of the partnership between the high-flying watchmaker and the legendary car manufacturer. Back in 2004, Parmigiani Fleurier was rewriting the rule book, taking its inspiration directly from the technology implemented on the Bugatti Veyron. In fact, nothing quite like it had ever been conceived in watchmaking before the Parmigiani Fleurier manufacture designed a watch with a three-dimensional “engine” (the Bugatti Type 370) to accompany the launch of the Bugatti Veyron 16.4. The watch brand has continued along this pioneering path ever since and works tirelessly to firmly anchor its Bugatti collection – the “court jester” in the Parmigiani Fleurier collections – in this visionary 21st-century watchmaking. At Bugatti, they often like to say, “We begin where others stop”; Parmigiani Fleurier has appropriated this maxim for itself by designing innovative watches (such as the Bugatti Type 370, Bugatti Type 370 Centenaire, Bugatti Super Sport, Bugatti Vitesse and Bugatti Super Sport Sapphire in particular) with tried-and-tested technology, in the image of the sports cars produced in the workshops in Molsheim.

THE BUGATTI CHIRON IN WATCH FORM
The latest creation in this prestigious collection, and the fruit of four years of development, the Bugatti Type 390 is in the same vein. And with good reason: it would be impossible to be inspired by the world’s fastest car and not develop innovative solutions! In fact, to accompany the first deliveries of the stunning Bugatti Chiron, Parmigiani Fleurier is lifting the veil on the Bugatti Type 390. This timepiece is truly one-of-a-kind; its exceptional performance and on-board technology is designed to emulate the Bugatti Chiron in watch form. A hub of innovations and brand new solutions, this engine block on the wrist is unique in its horizontal cylindrical construction. 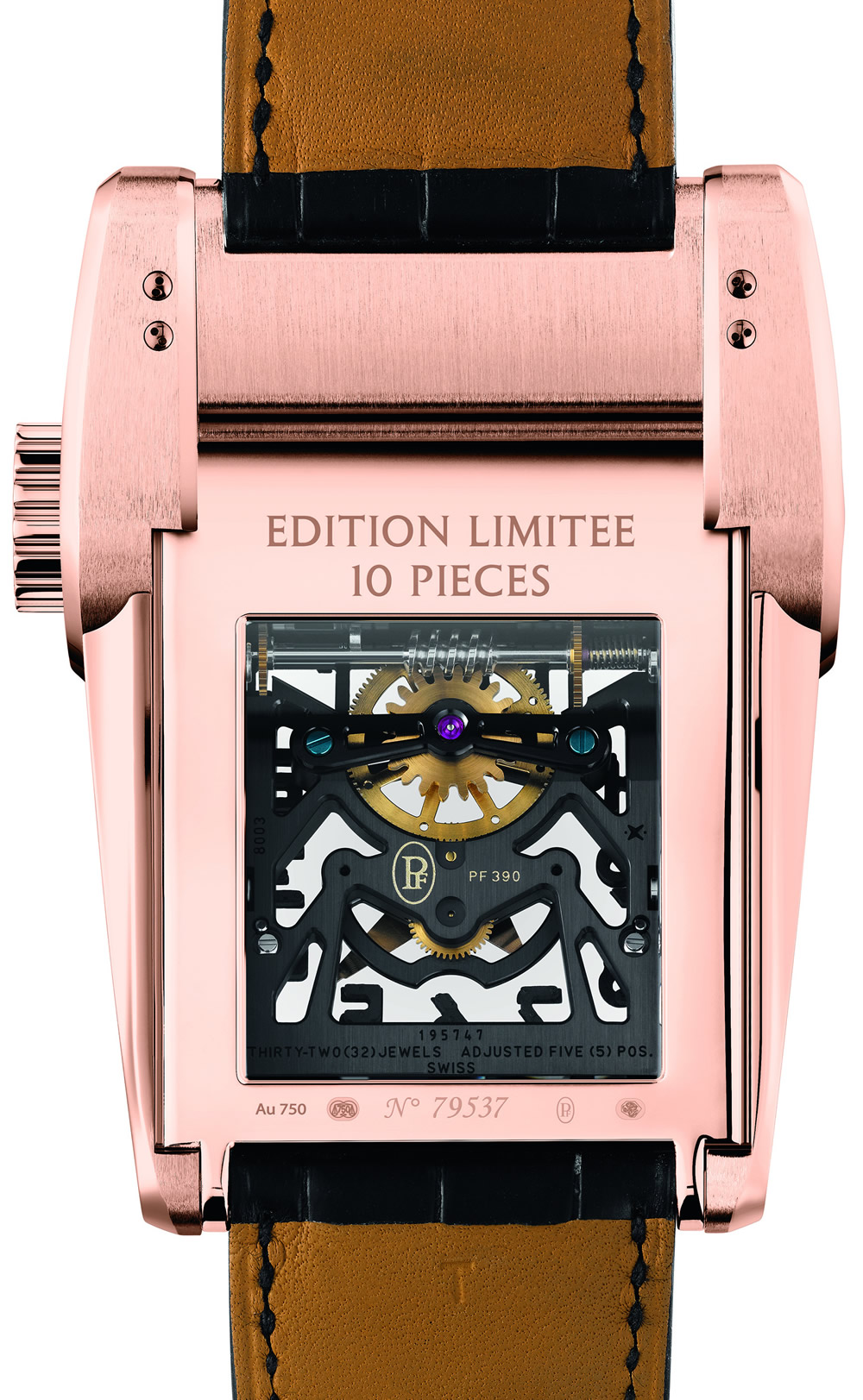 On the one hand, we have the 8-litre 1500-hp quad-turbocharged W16 engine propelling the sports car to a top speed of 420 km/h (limited for road use); on the other hand, we have the Calibre PF390 with its cylindrical “engine” and two series-mounted barrels – a nod to the saddle tank on the Bugatti – and featuring a flying tourbillon boasting an 80-hour power reserve. This new type of “engine” has been slimmed down so that its diameter is no larger than the regulator of its 60-second tourbillon, which shows the seconds. Once the diameter of the regulator was determined according to the inertia required (the balance has an inertia of 10 mg.cm2), the entire construction (including the barrels which power the “engine”) fit this measurement to form a regular cylinder. Key to this is the patent which was filed by the Parmigiani Fleurier manufacture when this unique hand-wound mechanical movement was being developed.

While the “engine” pushes the boundaries of traditional watch design, the watch itself also rewrites the rule book in many respects. Inspired by the principles behind the construction of the Chiron, the designers chose an engine/interior/bodywork design. Specifically, the horizontal cylindrical movement (the “engine”) is connected by a worm screw to the dial and the displays (the “interior”) which are positioned perpendicularly; the entire assembly is enveloped in a gold or titanium case and sapphire crystal (the “bodywork”) through which the moving mechanism can be admired.

THE SMALLEST BALL BEARING IN THE WORLD
Its modular construction, which enables the movement to be removed from its housing – as an engine would be removed for important modifications – involves many ground-breaking solutions. In fact, this calibre PF390 stands out thanks to its gear trains and their arrangement. The objective is the same as on all watches: namely to transmit the energy from the barrels to the escapement. But in view of the cylindrical configuration of the movement, the usual alternating wheel-pinion-wheel-pinion configuration is replaced by a transmission using three planetary gear trains. Each of these three planetary gear trains is equipped with a central train wheel, three planetary gears and a metallised fixed ring gear. A new type of component, this planetary gear train has never before been used in watchmaking gear trains.

This brand new planetary gear train uses the smallest ball bearing in the world: just 1.28 mm in diameter for 12 ceramic balls measuring 0.2 mm in diameter. The ball bearings used on the Bugatti Chiron may be very different in terms of size, but they are very similar in terms of technology! Each of the three planetary gear trains features three bearings, making a total of nine ball bearings in all. Another key point is the fact that the assembly requires no lubrication: a significant advantage in terms of reliability and maintenance.

Moreover, the manufacturers have designed a rod clamp – by replacing four common components on an ordinary watch movement (setting lever, setting lever jumper, yoke and yoke spring on the winding mechanism) – to perform the dual function of winding the two barrels and setting the time. This optimised development helps boost the performance of the mechanism. Using a single component instead of four makes it simpler and more reliable, thereby reducing maintenance. Exactly what we look for in any technological advance. This rod clamp mechanism is used to wind the two connected barrels (energy reservoirs), which are series-mounted coaxially.

The triangular coupling used for the Calibre PF390 enables self-centring of the two barrels, while their series-type coupling guarantees a constant transfer of energy – just like the fuel pressure regulator on the Chiron – and rate regularity for optimal timekeeping. The energy is then transferred via the planetary gear trains to the flying tourbillon regulator, at the end of the transmission chain which oscillates at a frequency of 4 Hz (28,800 vibrations/hour). The variable-inertia balance and the Breguet overcoil are made at Atokalpa, one of Parmigiani Fleurier’s manufactures. Just like the Bugatti Chiron, the assembly offers an excellent size-power-weight ratio and remarkable rate stability which propels this Bugatti Type 390 into the exceptional timepiece category. Another innovation of this Calibre PF390 is a torque limiter which protects the movement during winding by preventing any accidental breakage with a free return function. 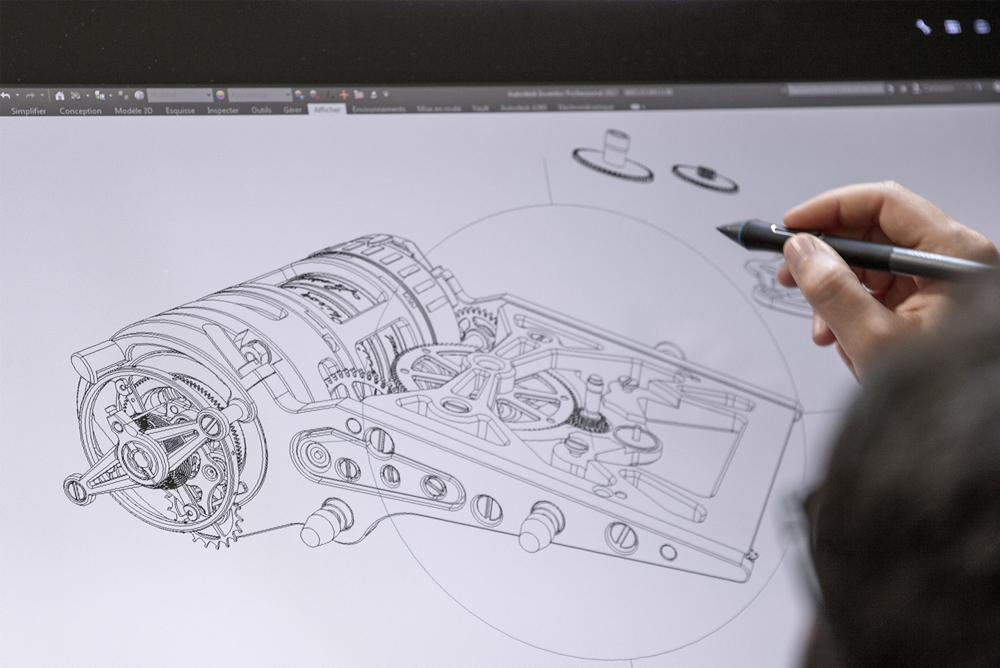 “FORM FOLLOWS PERFORMANCE”
Also inspired by the components used for the Bugatti Chiron, the PF390 movement is equipped with a bevel gear differential to show the power reserve. By designing a display tube (made from sapphire) which is peripheral to the movement, the Parmigiani Fleurier manufacture developed this unique construction in which a power-reserve train wheel drives a fixed toothed ring gear inside the tube. This taper pivots on two guide rings thereby enabling the power reserve to be read on the tube, by means of a fixed hand.

The Calibre PF390 – this cylindrical “engine” – benefits from another advance developed by the Parmigiani Fleurier manufacture: mounting the bridges coaxially guarantees absolute precision assembly. Such precision becomes all the more essential on the two bridges and main plates usually used in mechanical watches; the calibre PF390 is composed of seven layers featuring a total of 302 components. The blackened bridges accentuate the high-tech nature of the movement and its modular construction.

In terms of the architecture of the movement, the cylindrical engine block is fixed to the display module using a “conrod” type principle – inspired by the piston mounting for a car engine – secured by a component shaped just like a conrod cap.

True to Bugatti’s motto “Form Follows Performance”, another distinctive feature of the calibre on the Bugatti Type 390 is the use of a worm screw to transfer information from the train wheel to the dial. This worm screw is also used for the transfer from the engine cylinder to the dial displays, by twice moving through a 90° angle. This marks a first in watchmaking. This angle transmission function serves three aims: it enables a 90º transfer of energy, out of the closed cylindrical circuit and into the display on the dial. The central planetary gear train is responsible for this transmission to the dial. Moreover, this worm screw eliminates all the problems of indenting (caused by the hand sliding on the spindle) often found in ordinary watches. Finally, a spring at one end of the worm screw ensures regularity and comfort when setting the time on the movement via the crown.

HIGH-TECH CRAFTSMANSHIP
The use of innovative construction techniques in no way detracts from the traditional touch applied to all timepieces. This is seriously high-tech craftsmanship we are talking about: the ultimate in precision execution matched with the rare dexterity of a watchmaking expert. In fact, the Calibre PF390 on this futuristic watch boasts exceptional finishes across all its components. Enclosed in a titanium cage designed to control the forces at play without any deformation, the two barrels are engraved – one with the signature of Louis Chiron, the other with the inscription “le vieux renard” (the old fox), in reference to the nickname of this legendary racing driver.

In light of the watch’s innovative features and the unique solutions it offers, this Calibre PF390 heralds a new era in Parmigiani Fleurier’s Bugatti collection. In fact, it has been designed and created to become the platform for development of future Bugatti models.

WINDOWS ONTO SOME EXTRAORDINARY MECHANICS
Continuing in the sporting spirit of the Bugatti Chiron, the black openworked dial makes this a lightweight yet high-performance timepiece. The luminescent applique indices and hands create a stark contrast to ensure optimal legibility. Thanks to the 60-second tourbillon, the seconds can be read through the magnifying effect of the sapphire crystal at the end of the cylinder.

Inspired by the fluid curves of the Bugatti Chiron, the case is also created from gold, (white gold or rose gold, depending on the version), as well as in titanium and engraved on the back with the inscription “EDITION LIMITEE 10 PIECES” (10-piece limited edition). This case was created by Les Artisans Boîtiers – one of Parmigiani Fleurier’s manufacture divisions; constructed around the cylindrical structure and water resistant to 3 ATM, it stands out thanks to its ability to pivot 12° around its drive shaft (patent pending), to ensure perfect ergonomics around any wrist. The remarkable technical sophistication of the timepiece can be admired via the large openings topped with sapphire crystal, which is extremely complex to create. Via the top and the end of the tubular structure, the sapphire crystal thus invites us to dive deep into the heart of the timepiece’s incredibly complex mechanisms (the “engine” and flying tourbillon), while the openings over and under the dial reveal the watch’s many gears and enable the time to be read. The alligator leather strap is signed by Hermès and is fitted with a gold folding buckle.