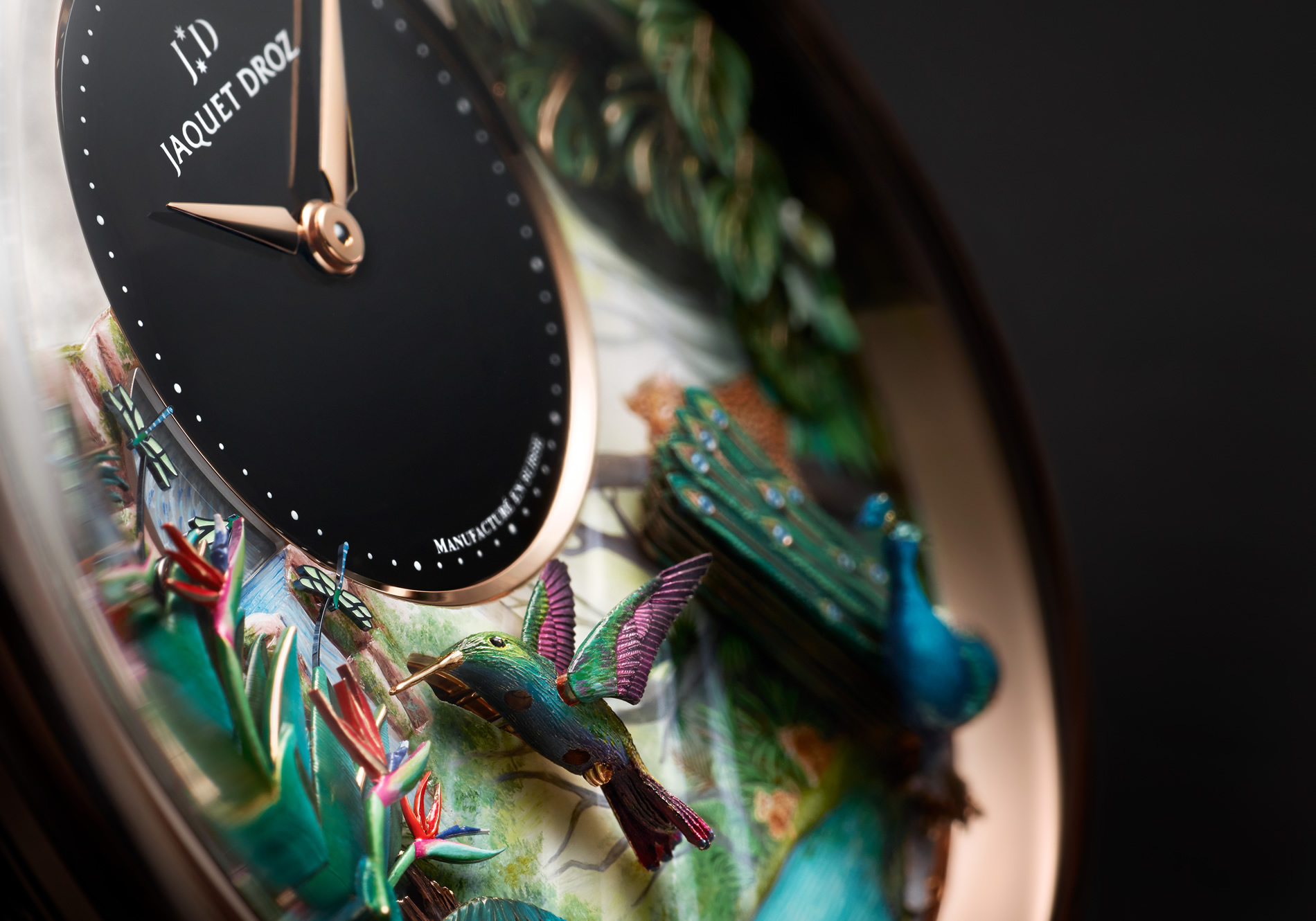 As part of its line of exceptional automaton watches presented since 2012, Jaquet Droz unveils a new model inspired by a tropical landscape. Celebrating the beauty of nature, its animated birds and other creatures push the boundaries ever further in the art of wonder.

A rendez-vous with emotion: like Gauguin’s exotic paintings, this is an invitation to faraway places and delights for the senses. The Tropical Bird Repeater watch – the only one of its kind in the world – brings together all the watchmaking and decorative expertise of the brand known by its two stars. A piece destined for discerning collectors, the Tropical Bird Repeater is part of a long history at Jaquet Droz, honoring the Enlightenment-era passion for nature and animals of founder Pierre Jaquet-Droz. Automatons, along with the Ateliers d’Art, represent two of the eight codes of the La Chaux-de-Fonds manufacture, hand-decorated here by engravers and miniaturist painters. 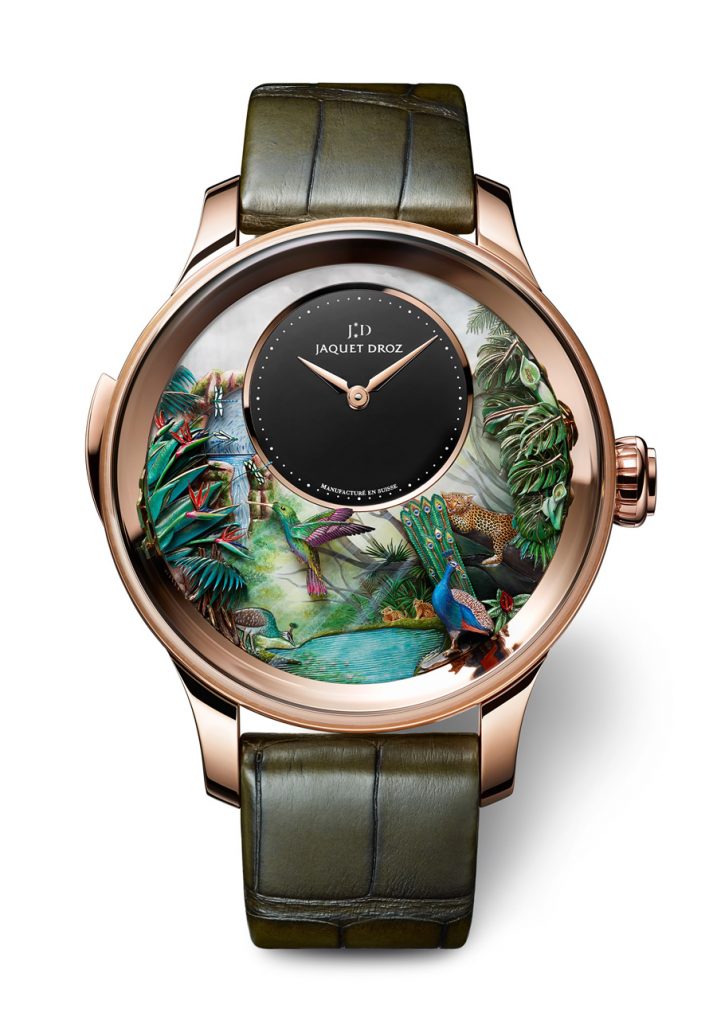 These codes are indispensable to the creation of this scene with its flamboyant colors that emerge like a lush oasis on a mother-of-pearl dial, itself enclosed in a gold case adorned on the sides of its lugs and on the middle band with an animal motif hand-engraved by the brand’s craftsmen.

A true source of life, the waterfall offers serenity to the blooming tropical flora and fauna. At the heart of this Garden of Eden, its water flows eternally in perfect realistic fashion. In the center, a hummingbird hand-carved and hand-engraved by the Maison’s artists moves towards a shrub of bright orange birds of paradise. A one-of-a-kind animation in watchmaking history, its wings beat up to forty times a second, adding incredible realism to the scene. To the right, a peacock with intense blue feathers veritably opens and closes its tail, while a toucan emerges from the palm leaves at 3 o’clock to open its beak. The dancing flight of three elegant dragonflies, located at 9 o’clock, adds to the magic by day or by night as their tiny SuperLuminova®-coated wings glow in the dark. In all, seven animations that may exceed twelve seconds allow for up to 120 different scenarios, all the more striking as they contrast with the suspended background of the scene. 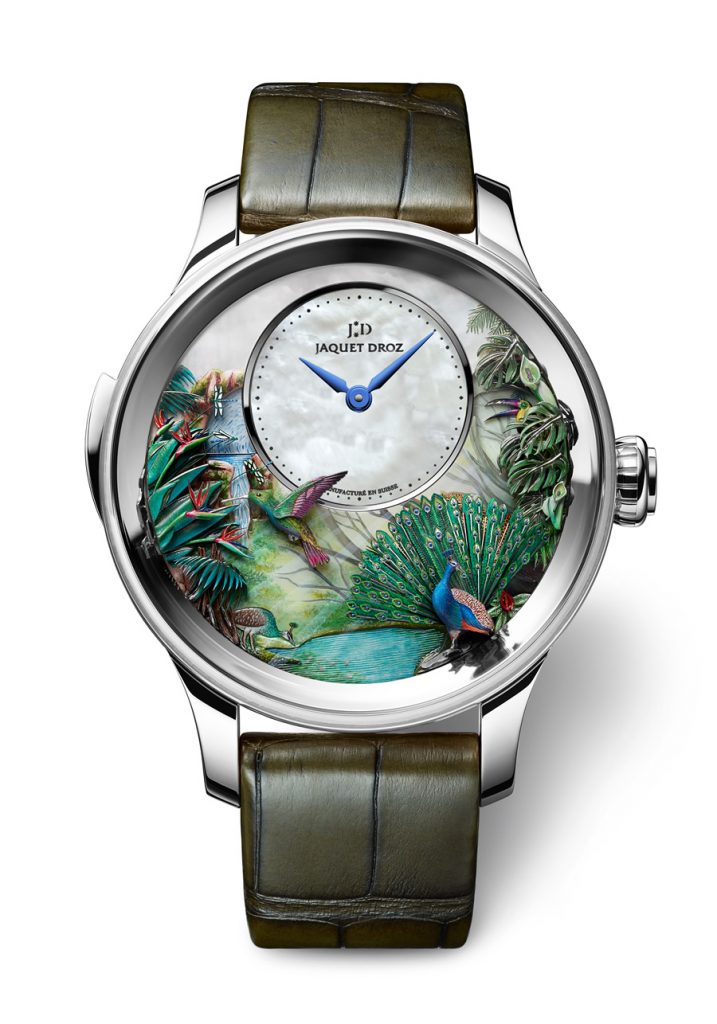 Alongside this prowess comes a grand horological complication, the minute repeater, which enables the marking on demand of the hours, quarter hours and minutes via the vibration of cathedral gongs struck by hammers inside the case. A push-piece activates this complex mechanism, which to this day remains the privilege of a handful of brands and collectors who will surely appreciate the innovations of the new Jaquet Droz RMA89 movement. The latter is equipped with a virtually silent wheel regulator, as the regulation of the minute repeater’s speed is operated by the friction between small outer spring blades. New rack springs, an extended pause between the quarter hours and minutes, and the striking of the quarter hours at major third (spanning four semitones) are also part of the complication’s innovations. The power reserve has been increased to 60 hours with an oscillating frequency of 3 Hz.

This technical mastery – which can be seen on the pared-down case back, engraved simply with the Numerus Clausus – serves to create the feast for the eyes that is the Tropical Bird Repeater. An esthete’s watch limited to 8 unique pieces – the Maison’s tutelary number –, it plays on the contrasts between the exuberant dial and the green alligator strap, as well as the onyx dial displaying hours and minutes on the red gold case or in mother-of-pearl on the white gold case. The aesthetics render the lively paradise by Jaquet Droz all the more striking: an incredible journey and a new chapter in the history of Jaquet Droz are now in the hands of the wearer.

More about this timepiece here